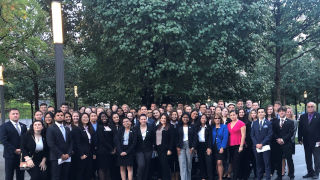 The Buccino Leadership Institute's freshman cohort travelled to New York City on Friday to visit the National 9/11 Museum and Memorial.

Leadership students learned about the heroic acts of fire fighters, law enforcement, and other first responders on 9/11, but they also learned about the leadership acts performed by everyday citizens who were suddenly thrust into action during the crisis.

According to Executive Director Dr. Bryan Price, the trip fits perfectly into the program's first-year theme of "Lead Yourself."

"Since we are an interdisciplinary program that teaches the fundamentals of leadership to students from a variety of disciplines, we are always looking for experiential opportunities to learn about leadership in an interdisciplinary setting. The 9/11 Museum and Memorial is the perfect place to do this and to reflect on the kind of life you want to lead."

When the students arrived, they received a short briefing from Dr. Price about the memorial's history, the layout of the two reflection pools, and the story of the "Survivor Tree." This was Price's 19th visit to the memorial, and he said he learns something new each time he visits. 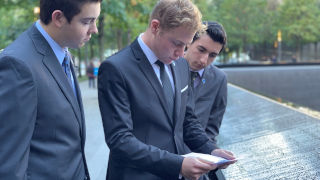 Upon arrival, the students split into smaller teams to find and map the 14 names of 9/11 victims that had an affiliation with Seton Hall. The fact that some of these SHU alumni were only a few years older than them was not lost on many of the freshman.

Noah Rauch, Senior Vice President of the National 9/11 Museum and Memorial, greeted the students and let them in the museum before it opened to the public. Students were treated to a special tour of the museum that was focused on the many stories of leadership on that fateful day.

Students heard the story of Rick Rescorla and how he successfully evacuated the 2,687 Morgan Stanley employees before going back in when the South Tower collapsed.

They learned about Moira Smith, the only female NYPD officer killed on 9/11, who rescued hundreds of evacuees before going back into the Towers one last time to help evacuate more.

To Maureen Gillette, Dean of the College of Education and Human Services, the stories the students heard left an indelible mark on their leadership development.

Dean Gillette said, "The 9/11 Memorial and Museum is the perfect venue to reinforce the first-year leadership theme of ‘Leading Yourself.' We heard so many moving 9/11 stories, from the window washer whose quick thinking with his squeegee saved a group trapped in an elevator, to the many members of the FDNY who bravely went up the stairs when everyone else was scrambling to get down. These stories reinforced the idea that we all have a leader inside of us if we choose to act when others need us the most."

After the personalized tour, students had the opportunity to tour the various exhibits on their own. Rishi Shah, a freshman from the College of Arts and Sciences, was emotionally impacted by several of the museum's exhibits. "Being exposed to first-hand accounts of the Shanksville (PA) plane audio along with footage of the planes striking the towers that I had never seen before helped me gain perspective on the true devastation, fear, and paranoia 9/11 had caused. It was a raw emotional experience, and I hope to implement some of the leadership lessons I learned as I serve here at Seton Hall."

Following their personal time in the museum, students then assembled in the auditorium to hear from a special guest. 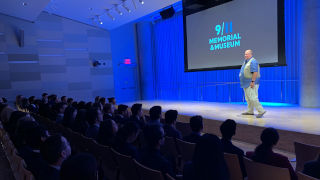 Bill Spade '81, a docent who serendipitously ran into last year's group of Buccino leadership students during their trip, was the lone survivor of his Rescue 5 team that responded to the World Trade Center on 9/11. This year, he agreed to speak to our students in a special session in the auditorium. He mesmerized the leadership students with his emotional story about what happened that day and implored everyone to live every day to the fullest.

Wendy Gonzalez, a freshman nursing student, had been to the 9/11 Museum before, but hearing Spade speak was a unique experience. "I never had the opportunity to listen to anyone who had lived through the disaster first-hand. It was one thing to walk around the Museum and hear the numerous audio recordings, but listening to the speaker recount the event, seeing the pain in his eyes and disbelief in his voice, turned 9/11 from history into reality for me."

Thomas Rondinella, Associate Dean and Associate Director for the College of Communication and the Arts, agreed. Like the students, he was especially moved by Spade's talk.

"The trip aroused all the emotions of that day back to me," said Rondinella. "Bill Spade's testimony made it much more personal and powerful. Although I had avoided visiting the museum, I was emotionally fulfilled by the experience."

After Dr. Price awarded Mr. Spade, Mr. Rauch, and the two tour guides the Institute's new challenge coin, he led a session where students reflected on what leadership lessons they learned that day and what was most impactful to them.

The room stood still when freshman nursing student Zoe Greene shared that she had lost a family member in the South Tower on 9/11. Afterwards, she reflected on what the day meant to her.

"This was my first time at the Memorial, and it was a very emotional experience. It has been very hard for my family to discuss. Being able to experience the Memorial and Museum with the Buccino leadership program meant a lot to me because not only was I able to connect for the first time with the event, I got to do it with my peers."

When one of the freshman asked Price what was most impactful to him, he paused before answering. "Although it is so emotional every time you come here, it is also an amazing opportunity to hit your own personal reset button. It is easy to get caught up in the drama of every day life and forget about what's most important. When you come here, you cannot help but think about how precious life is, and it is an important reminder to live every day as if it's your last."