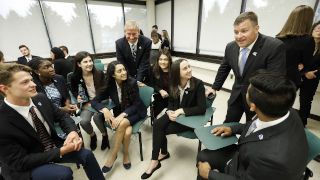 The Buccino Leadership Institute at Seton Hall University has received a total of $7.1 million in gifts in recent months to develop the next generation of leaders. $5.7 million in donations and estate gifts were donated to further the work of the Institute and three of its Centers, along with an additional $1.4 million in preferred scholarship support for students in the program.

Launched in fall 2018, the Buccino Institute is the first interdisciplinary undergraduate leadership program of its kind in the United States. Within the Institute there are distinctive leadership centers in six schools and colleges at the University — each a thought leader for a specific aspect of leadership based on the philosophy and work of that academic discipline.

"One of the things that makes our program stand out is its combination of cross-disciplinary and intra-disciplinary leadership development," said Lieutenant Colonel (Ret.) Bryan C. Price, Ph.D., founding executive director of the Buccino Institute and one of the nation's top leadership experts. "Students in a variety of majors learn about the principles of leadership and learn from each other as a cohort, and then receive leadership development that is specifically tailored to their future profession. You then add peak performance psychology on top of that, and you have a leadership development program that is unlike any other in the country."

For five years in a row, the Gerald P. Buccino '63 Center for Leadership Development in Seton Hall's Stillman School of Business has received national recognition, earning a #1 ranking in the LEAD Awards sponsored by HR.com. The Business Center's success served as the catalyst for creating the university-wide leadership institute.

Invested in the Institute's success, the following donors have stepped forward to fund and further advance the innovative program.

Buccino Institute
Gerald P. Buccino, a 1963 graduate of the University who is widely regarded as a global visionary in the turnaround management profession, provided the lead gift of $2 million to the Institute which was named in his honor. For more than 30 years, Buccino has consulted with stakeholders at every level, leading to an array of successful corporate turnarounds and reorganizations. He has worked with companies in numerous industries ranging in size from middle market to major publicly held corporations and has held a variety of C-Level positions including chairman, CEO, COO and CFO. A founding member of the Turnaround Management Association, Buccino has five decades of board service for business and not-for-profit organizations.

In addition to Buccino's gift to the Institute, three of its Centers have received additional support.

Arts and Sciences
The College of Arts and Sciences Leadership Center has received $1 million from the estate of Louis Gentile. A 1958 graduate of the College, Gentile was a veteran of the United States Army and worked for many years in the insurance industry. A loyal supporter of the University during his lifetime, and out of gratitude for the values-based education received at Seton Hall, Gentile generously remembered his alma mater in his estate plan. In honor of the gift, the College's center has been named "The Louis and Vivienne Gentile Arts and Sciences Leadership Center."

"The Buccino name has been synonymous with leadership excellence for a long time in the Stillman School of Business. With Jerry's generous gift, coupled with the estate gifts and scholarship support, we can now develop a new generation of leaders across the University and in every discipline and industry," said Price. "When people think of leadership development, I want them to think of Seton Hall and the Buccino Leadership Institute."