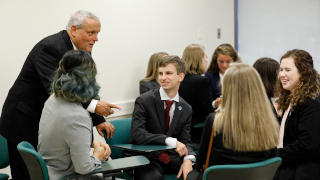 McBride was a 1953 graduate of Seton Hall who majored in communication arts and served as a department head and chief announcer for WSOU, the University's award-winning, student-run radio station. He went on to serve as a professor of communication at the University for more than 40 years and owned Bubble Land Amusement Park on the Asbury Park boardwalk in the mid-'70s and '80s.

According to Jack Kelly '66, who knew McBride while a student, "Lloyd was involved with the campus radio station from his arrival on campus in 1949. In 1952, he started the radio program 'Across the Footlights' which was to run for almost 20 years on WSOU."

WSOU began broadcasting in April of 1948, making McBride an early pioneer of the radio station that would go on to be inducted into the Rock Radio Hall of Fame and the recipient of numerous national and regional awards, including the 2016 Marconi Award for Noncommercial Station of the Year, a Peabody Award, several New York International Radio Festival awards and a Clarion Award, among others.

Professor Emeritus Donald J. McKenna of the College of Communication and the Arts, who knew McBride as both a student and colleague, shared fond memories. "Lloyd was an essential part of the fabric of who we were as a radio station, department, college and university," said McKenna. "He personified many of the finer qualities of what makes Seton Hall special: responsibility, reliability, civility, respect and constancy."

McBride was a loyal supporter of Seton Hall during his lifetime and, out of gratitude for the values-based education received at the University, he generously remembered the University in his estate plan.

The Communication and the Arts Leadership Center is part of the Buccino Leadership Institute, which is the first interdisciplinary undergraduate leadership program of its kind in the United States. For five years in a row The Gerald P. Buccino '63 Center for Leadership Development in Seton Hall's Stillman School of Business has earned a #1 ranking in the LEAD Awards sponsored by HR.com; the Business Center was named the #1 Certificate Program with Emphasis on Leadership/Organizational Development.

To build on that success, Seton Hall launched the new Buccino Leadership Institute, expanding leadership development to students outside of the School of Business. The Institute is comprised of distinctive centers in six schools and colleges at the University (including the Lloyd A. McBride Communication and the Arts Leadership Center) that work together to develop the next generation of leaders.

"We are so thankful to Mr. McBride for this tremendous gift," said Lieutenant Colonel (Ret.) Bryan C. Price, Ph.D., founding executive director of the Institute and one of the nation's top leadership experts. "I believe he would be very proud of the leadership students we have in the College of Communication and the Arts, and how his philanthropy will enable them to become the best leaders they can be. It is not lost on me that Mr. McBride had a close connection with WSOU. Some of our great leadership students currently work for WSOU and we have partnered with the radio station to help produce the Seton Hall Undergraduate Leaders podcast on a weekly basis."

The gift will be used to fund various initiatives within the Center, including a leadership coaching program, industry-leading personal assessments (personality, behavioral and emotional intelligence) along with other performance psychology initiatives for students within the program, site visits, conference travel, student and faculty research, stipends and course release coverage as well as guest speakers and events.

This is the second $1 million gift to the Buccino Leadership Institute. The first was from the estate of Louis P. Gentile '58, a graduate of the College of Arts and Sciences and an insurance industry executive. Read more.

Remembrances of Lloyd A. McBride:

Professor Emeritus Donald J. McKenna, College of Communication and the Arts
I knew Lloyd since 1962 when I was a student at WSOU, for decades as a colleague, and for 13 years as his chair of the Department of Communication. As a WSOU staff member, I saw Lloyd as one of the old hands on the radio. A link with WSOU's past, and one of the stable elements of our tradition at WSOU. The later, as my colleague, Lloyd (along with a few other faculty members including Dr. Al Paul Klose and Prof. Gil Rathbun and others) were constants from my student days: experienced faculty I could turn to for advice and assistance. Lloyd was always available for a collegial chat and advice, with those special Lloyd McBride characteristics of civility and respect. Lloyd was a gentleman to everyone, all of the time. He respected students, colleagues and his audience. And you always felt respected when you talked with Lloyd. From the perspective of a chair of the department, Lloyd McBride was constant, responsible and reliable. You knew exactly what you were getting from Lloyd. And you knew you could ALWAYS rely on him for whatever you needed and to ALWAYS give his best. He was a rock of stability in a changing University."

Catherine H. Zizik, M.A./M.F.A.
As I think back on Prof. McBride's tenure at Seton Hall, I remember how student-centric he was. His door was always open as he welcomed his students to seek more advice outside of the classroom. He could be heard whistling down the corridor of the lower level of Fahy Hall... he was all things good about our university. His smile radiated at faculty meetings and his wisdom and encouragement helped me want to lead.

Dr. Evelyn Plummer, Associate Professor
Lloyd McBride was one of the people who welcomed me to the department when I arrived many years ago. He was very generous with sharing tips and techniques for teaching Oral Communication. I recall he spent lot of time and effort working with his students on an individual basis. In the time I knew him, I noticed that he audio recorded almost all of their presentations and would sit down with them individually to give his students helpful guidance and feedback. He was a great colleague!

Jack Kelly '66
Lloyd's knowledge of the musical theater stage was pretty encyclopedic, and he had a huge collection of recordings which he shared with his audience. He was a good man and his heart was in the fabric of WSOU. After his graduation, Lloyd worked with Al Paul Klose, another 1953 graduate, and later Chair of the Communications Arts Department, as Program Director of WSOU as Al Klose took on the role of Station Manager/Director, following the resignation of the founding Station Director, Msgr. Gillhooley. While an instructor in the Communication Arts Department, he mainly taught a core course called Voice and Diction. I suspect a role that most non-radio station related students will remember him for as he had a unique style and delivery. Lloyd also was one of four members of the transitional WSOU advisory council that Fr. James Pindar used when he became the Station Director following Mr. Klose in early 1961. He was the replacement Station Director from 1969 to 1973. During that time of station maturation, he continued his low-key style of leadership allowing the student management to grow in knowledge and skill."

Former WSOU News Editor Deacon Charles Paolino '60
I met Lloyd McBride when I was a freshman at Seton Hall in 1960. I spent a lot of time with him in the classroom and at WSOU. He was easy to get along with and related to us more as colleagues than as an instructor and his students. He had a low-key way of correcting our errors. I still laugh when I think of a time when I experienced that quality of his. I was doing one of my first shifts on WSOU, a program called "Evening Concert." I had read the script introducing Aram Kachaturian's "Gayne Ballet" and started the record, which was the technology then. While I was sitting there listening to the music, Mr. McBride opened the studio door, stuck his head in and said, "Mr. Paolino, it's customary to play side 1 before side 2." After I had graduated, gone to graduate school, married, and had three children, Mr. McBride would let my kids ride gratis on the kiddie rides he operated in Asbury Park, and he also let them stay on the rides as long as they wanted to. Mr. McBride belonged to another era. For that matter, so do I. But at the time, his congenial approach to academics and radio broadcasting were about right for a naive public-school product who wasn't well prepared for higher education.

Joe Garifo '72, retired adjunct professor in the College of Communication and the Arts
I am a 1972 Seton Hall graduate who was a station staff member from 1968-72, and the station's program director during my senior year. Following graduation, I had an 18-year career in radio journalism, followed by 24 years as public information director for the Morris County, New Jersey, government. During the first few months of my freshman year at the university, I was spending a lot of time at WSOU — perhaps too much time. One day, Mr. McBride found me in one of the station's studios and said, 'Joe, some of your professors think you may have the wrong idea about college.' I replied, "What do you mean, Mr. McBride?" He answered, "You see, Joe, colleges have these things called classes. I know you're a freshman, and you may not realize it, but classes are things you are expected to attend." I didn't even think he knew my name, but he did, and he sought me out to let me know I had to find a balance between academics and WSOU.