What Great Minds Can Do: Keshav Agiwal

"Real leaders aim to achieve shared goals that are best for the greater good while making each member of the team feel valued. Being a leader means to aim at making positive changes and adding value to the community around oneself while learning and growing from these experiences." 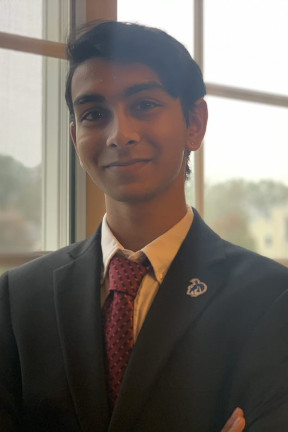 Through various experiences, Keshav recognizes the positive impact effective leadership has on others. Keshav began his leadership journey in high school. He served as president for both the Model United Nation Team (which he founded) and the Mock Trial Team. As a member of the Buccino Leadership Institute at Seton Hall University, Keshav hopes to continue developing his leadership skills in a more professional ambiance.

On Seton Hall's campus, Keshav is actively involved in student organizations. Through his on-campus engagements, he aims to bring cultural awareness to students. To Keshav, understanding different cultural norms, traditions, and perspectives is crucial for enriching oneself and expanding one's ways of thinking to incorporate more diverse opinions and ideas. He has created SHU Taal, a dance team on-campus, that uses Indian classical dance forms to show issues surrounding the South Asian community and global environment. Minoring in communication, Keshav uses the skills he learns in the classroom to manage social media platforms for student organizations he is a part of, and effectively communicate to others to improve student involvement and participation. He is also the captain of SHU Saba, a fusion dance team, and the logistics chair for Muqabla, a fusion dance competition at Seton Hall University.

Keshav chose to attend Seton Hall University because of its thorough diplomacy program. His involvement in the creation of a Model United Nations Team at his high school sparked Keshav's interest to pursue a professional career in foreign relations and law. Through his high school leadership roles, Keshav dedicated himself to understanding foreign issues, policies, and conflict resolution. Once in college, he joined the Diplomatic Envoy, the newspaper for the School of Diplomacy, as a staff writer to continue learning about these global problems. He researches specific issues or events and writes to keep others with similar interests informed. Aside from understanding international issues, the Envoy has also allowed Keshav to strengthen his writing skills. Keshav realizes that the skills he learns through one activity can benefit and improve his performance in other activities and aspects of his life. He actively looks to apply the skills he learns to improve his efficiency and help student organizations grow to have a greater outreach.

Through the Leadership Institute, Keshav hopes to learn about becoming a more effective servant leader and receive advice from professionals and experts in his fields of interest. After coming to Seton Hall, he realizes that there is more to leadership than leading a group to achieve something. True leadership, he believes, stems from actively listening to team members and serving alongside them to achieve a common goal. Leadership, to him, is a lifestyle. He says, "Oftentimes, I feel leaders sometimes forget that we have to live by the values that we promote and lead by example."