What Great Minds Can Do: Allison Gennette 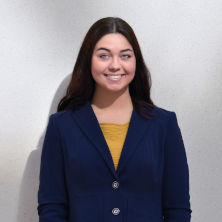 "I am ready to step out of my comfort zone and challenge myself in new ways."

Allison Gennette came to Seton Hall from California on scholarship as an ambitious student. Excited about the friendly area of Seton Hall, Allison Gennette is most excited for the abundance of opportunities here, especially being located so close to New York. Her biggest influence for coming to Seton Hall was Michael Reuter, as he informed and encouraged her to take part in the leadership program. After meeting Reuter, Allison felt comfortable with Seton Hall and knew that the faculty here really do care about their students.

Back at home in California, Allison proved herself to be a leader in multiple ways. After being a Girl Scout for 11 years, she completed her Gold Award by renovating teaching classrooms for free. She also organized and took part in a young leaders council and planned a yoga, art, and music festival, donating the proceeds to the victims of sex trafficking. Having moved across the country to pursue her degree in Public Relations, Allison faced a lot of fears, but she is grateful for the leadership program because it provided "an easier transition having a built-in family."

Allison knew that she wanted to be a part of the leadership program from the very beginning. Originally, Allison was looking for ways where she could major in leadership. Ever since she was young, Allison took on as many leadership roles as she could, from Girl Scouts to student government. This Buccino leadership program at Seton Hall would allow her to build her network and her brand, while allowing her to "learn from the best."

On campus, Allison has a strong grasp on who she wants to be after Seton Hall and is asserting herself in many clubs and activities. She has been instrumental in the planning of PirateThon, a fundraiser for children with cancer, serving on the Public Relations Committee her freshman year and as co-president her sophomore year.  Also, in her sophomore year, Allison was an admissions intern at Seton Hall, which she pursued due to her interest in pursuing a similar career path. On top of that, Allison has also participated in Team Walker, a nonprofit organization that helps solve various business problems and helps transforms the lives of inner-city youth.