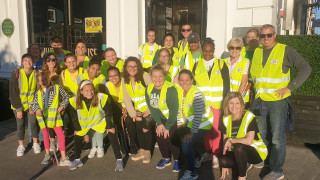 Attendees of the College of Arts and Sciences Servant Leadership Trip before Tidy Towns.

This past August, Buccino Leadership Students Shannon Meloche, Muireann Carmody, and Meghan Murphy had the privilege of attending the College of Arts and Sciences Servant Leadership Trip to Limerick, Ireland. The students were presented with numerous servant leadership opportunities throughout the week. Some of them returned to the same placement each day and established relationships with the existing workers, while others visited a new job site each day to get a broader look at the city of Limerick. This allowed each volunteer to have a unique experience and gain incredible insights into what it truly means to be a servant leader.

One event that every student was able to attend was Tidy Towns, where a group of volunteers would gather for one hour during the evenings to collect trash off the city streets or clean up some of the surrounding community gardens. Because the group from Seton Hall was so big, the volunteers were able to cover more ground than usual, so each night was a big success. Tidy Towns also served as a social activity for the volunteers: they could talk to each other, listen to music, and laugh. It also allowed for an up close and personal view of the community through the things people discarded on the streets. 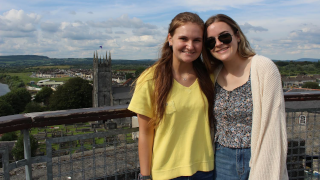 In addition to fostering relationships with the community of Limerick, the seventeen students who attended were also able to create strong bonds between each other, as well as with their four chaperones. The students stayed in apartments on the campus of Mary Immaculate, the college that works with Seton Hall University in order to coordinate the trip each year, with three students assigned to each apartment. These three students then had the responsibility of cooking a family style dinner one night for all twenty-four people on the trip, beginning from buying groceries and ending with washing the dishes afterwards. The meals shared in Apartment 3, which had a large table to accommodate everyone, were the best meals on the trip, because the students were able to talk and open-up in a safe place, without outside distractions. Without loud music or outside people, the students and chaperones were able to share a home cooked meal, comradery, and countless stories and laughs. These nights transformed a group of seventeen random Seton Hall students, many strangers at the start of the trip, into a tight-knit family.

Experiencing a new city in a foreign country as a servant leader rather than a tourist creates an entirely new perception of an unfamiliar culture. The students who attended this trip did not just witness the Irish way of life from an outside perspective, but rather were immersed in it through interactions with the local people and their communities. Their experience truly embodies the pillar of Civic Engagement in the Buccino Leadership Institute, as they volunteered their time, money, and efforts to assist a community that needed help. Perhaps the most meaningful lesson the students learned was how to abandon their own cultural perspectives in order to assist the local communities to the best of their ability, without inflicting their own ideals upon them. The trip put names, faces, and places to the student's ideas of servant leadership, creating an unforgettably meaningful trip for those who attended.