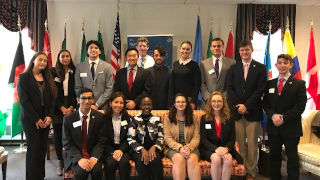 Last Friday, Ambassador Liberata Mulamula visited the Buccino Leadership Institute's diplomacy cohort to speak about her experiences in the multiple offices she has held involving international affairs. Being not only the permanent Secretary of the Tanzanian Ministry of Foreign Affairs and International Co-operation, but also the Tanzanian Ambassador to the United States, Special Assistant to President Jakaya Mrisho Kikwete of Tanzania on diplomatic matters, and the Executive Secretary of the International Conference on the Great Lakes Region of Africa for Peace, Stability and Development, she shared her 35 years of diplomatic experience with the fifteen students.

Helping sustain peace at Tanzania's border and beyond, she shared key points on how she was able to surpass others in becoming an ambassador and a leader with the students. What intrigued the cohort the most was how Ambassador Mulamula had focused on the logic behind her decisions and how they intertwined with the Buccino Leadership Institute's Pillars. Ambassador Mulamula was ceaseless in seeking global change as well as personal growth. After being denied the journalist position she desired, she made the most of her education in International Relations and sought a different job within the government. Her first posting within the government would give her an opportunity in the United Nation's General Assembly. Ambassador Mulamula even noted that she had learned to develop "not only the courage to approach, but the courage to speak", as she represented a newly formed sovereign government in the midst of international superpowers. 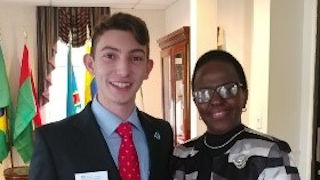 And, as with any representative, Ambassador Mulamula had to collaborate. Working with other countries in the United Nations, she worked to help colonized states have a case in the global theater. After seven years of working towards her goals, she made the selfless decision to spend two years moderating peace during the Rwandan civil war. During this change and conflict management, she made it a point to remain calm, for "that is one of the traits of a diplomat." Essentially, having compassion for those one serves as well as maintaining a calm demeanor is quite important for a servant leader because, ultimately, the leader is responsible. Sharing this knowledge, Ambassador Mulamula emphasized that "when you fail, you take responsibility. But, when you win, it is all of us."

Spending two years in the crucible of Rwandan moderation, Ambassador Mulamula unknowingly shared the last three pillars of leadership principles: courageous communication, character, and civic engagement. Being told that every week that it was the last week of negotiation for two years, the young ambassador courageously worked to see that peace was met between the rivaling people. Even after a shaky peace was brokered and then broken with the Rwandan Genocide, she continued to operate at the international level. Ambassador Mulamula helped to found the International Conference on the Great Lakes Region of Africa for Peace, Development and Stability with the vision to ensure that the eleven countries the conference covered would never see genocide again.

In all of her experiences, she would share the importance of: having a plan, goals, and a vision, understanding the strengths of diversity, following the path of prevention, negotiation, and dialogue, and realizing true potential. However, what stuck to the students the most was her slogan which she shared as a final thought: "This new generation, you cannot repeat the mistakes we have made. You must do better."