The drafting of Nostra Aetate 4 is the peak of the Institute of Judaeo-Christian Studies' efforts to raise the consciousness of believers that the Church and Judaism are both rooted in the history of salvation. Personally, I am grateful to have been chosen to write the study of truths on which the Church's life rests.

A true visionary, Monsignor John M. Oesterreicher dedicated his life to the service of God and to the ministry of reconciliation between Christians and the Jewish people. 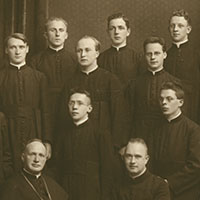 John Oesterreicher (center, second row from top) at his 1927 ordination

Monsignor's untiring efforts began in Austria, where he was born in 1904. A Jewish convert to the Catholic faith, Father Oesterreicher was ordained to the priesthood in 1927 and devoted his early years in the priesthood to parish work, ecumenism and peace.

Monsignor's experiences in Vienna led him to vigorously and publicly denounce Nazi persecution and Adolph Hitler's glorification of race and hatred for Jews in print through Die Erfüllung, a journal he founded and edited from 1934-1938. Father Oesterreicher was subjected to interrogation by the Nazis and considered an enemy of the Reich for his views in 1938.

Father Oesterreicher eventually fled to Paris following the annexation of Austria. Upon his arrival in Paris, he began making weekly underground radio broadcasts that condemned Nazi tyranny and called for Austrian resistance. Wanted by the Gestapo, Father Oesterreicher left Paris the week the Nazi troops entered the city and travelled circuitously through Spain and Portugal, finally arriving in the United States via the SS Exeter November 12, 1940.

After serving several parishes in New York City, Father Oesterreicher was invited to Seton Hall University in March 1953 and became founding director of the Institute of Judaeo-Christian Studies.

From the beginning of the Institute's creation, Father Oesterreicher continued to foster a positive understanding of Judaism and the Jewish people among Christians through lectures in the United States and Europe and through research, book and journal publications in English and German, including those published in The Bridge, a series of five volumes of scholarly research published by the Institute from 1956-1970. 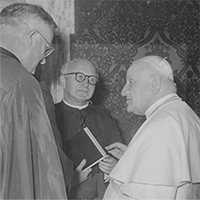 Only seven years after founding the Institute in 1960, Father Oesterreicher responded to Pope John XXIII's call for an ecumenical council by petitioning Augustin Cardinal Bea to probe the relation of the Church to the Jewish people. Father Oesterreicher's work resulted in his becoming a principal architect of the "Statement on the Church's Bond to the Jewish People" within Nostra Aetate , 4. This watershed document laid the foundation for positive Jewish-Christian relations and influenced the work of countless individuals as well as episcopal conferences and bishops throughout the world.

Father Oesterreicher was subsequently named an Honorary Prelate with the title, "Monsignor," in recognition of his work.

In 1975, ten years after the close of the Second Vatican Council (1962-1965), Monsignor Oesterreicher was successful in launching the world's first Jewish-Christian Studies Graduate Program at Seton Hall University in 1975. The new program was initially financed by Ms. H. Suzanne Jobert, and in addition to Monsignor Oesterreicher, the original founding full-time faculty members included Rabbi Dr. Asher Finkel, one of the first Orthodox rabbis to teach religion at a Catholic university, and Rev. Dr. Lawrence E. Frizzell, Associate Professor in the Department of Religion and current Director of both the Institute of Judaeo-Christian Studies and the M.A. in Jewish-Christian Studies Program.

The 1980s and the 1990s continued to be a period of expansion for the Institute as we increasingly provided scholarships to the growing number of students enrolled in the M.A. program, progressively offered lectures throughout the United States and Europe and regularly published scholarly articles in various journals and in the Teshuvah Institute Papers , which the Institute founded at Seton Hall University in 1970.

Monsignor Oesterreicher actively pursued the challenges of articulating the Church's vision and devotedly continued his dialogue between Catholics and Jews until his death on April 18, 1993 at the age of 89.

Monsignor's peaceful pursuits and contribution to the reconciliation of Catholics and Jews were so significant and far-reaching, the Catholic nonprofit, Our Sunday Visitor, named him one of eight extraordinary priests who influenced the world.

Former College of Arts and Sciences Dean Bernhard Scholz's following proclamation on the occasion of Monsignor Oesterreicher's fiftieth ordination to the priesthood best sums up our director's extraordinary impact:

Rarely has a life over five decades been dedicated so single-mindedly to so necessary and noble a goal; and rare indeed must be the man in the Church whose concerns and hopes became, within his lifetime, the policies of popes and a general council of the Church. 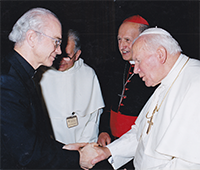 The Reverend Dr. Lawrence E. Frizzell, Monsignor Oesterreicher's colleague and successor, has faithfully carried out the mission of the Institute since 1993.

Father Frizzell's dedication to his vocation and to the ministry of reconciliation between Christians and the Jewish people prompted Pope Benedict XVI to appoint him as Consultor to the Commission for Religious Relations with the Jews in the Pontifical Council for Promoting Christian Unity in 2008. Pope Francis renewed Father Frizzell's appointment in 2014 for another period of five years.

Under Father Frizzell's guidance, the Institute continues to make a significant local, regional and global impact in our world. As we celebrate our 67th anniversary, we progressively look forward to advancing and strengthening Jewish-Christian relations among a new generation of scholars, theologians, educators and students who are committed to promoting universal peace through their shared values, practices and traditions.