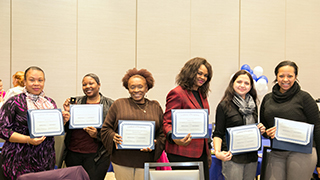 Awardees gather to show off their certificates recognizing their more than 10 years of service to the University.

One hundred and thirty-three employees were recognized for their service to the University at the 2018 Department of Human Resources' annual Service Recognition Awards Ceremony earlier this Spring. All regularly employed administrators, faculty and staff with ten or more years of service were honored – the awards were bestowed in increments of five years up to fifty years of service. 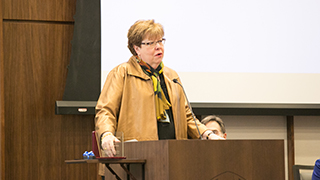 Held in Bethany Hall, the ceremony featured an Invocation from Reverend Brian Needles and welcoming remarks from Interim President Mary Meehan. The keynote speaker was Dermot Quinn, professor and director of graduate studies in the Department of History. Quinn's presentation "Seton Hall Service – Then and Now" highlighted how the landscape of Seton Hall has changed over the last 50 years but how the employees' commitment to the students has never wavered. A musical performance by the student-led Seton Strings followed Quinn's presentation before Interim Provost and Dean Emeritus Karen Boroff took the stage to make a special awards presentation. 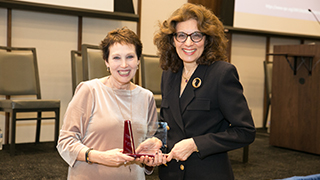 Michael Silvestro, associate vice president of the Department of Human Resources, awarded the remaining employees for their service. Certificates and University pins noting years of service were given to each of the honorees.

"This year's Service Recognition Awards Ceremony was truly special. I believe it is vitally important to recognize the contributions of the dedicated faculty, staff and administrators who serve our students and our University's Catholic mission," said Silvestro.

Worthy of note are faculty, administrators and staff approaching 50 years of service: