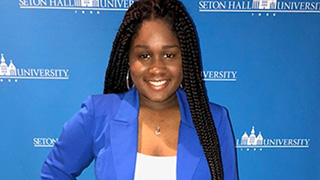 Nia Green, a soon-to-be Seton Hall senior majoring in Sociology and Africana Studies with a minor in Political Science, has been awarded a fellowship, sponsored by AT&T, to participate in the 2018 Normandy Academy Program organized by the National World War II Museum. The competitive program offers students an opportunity to "explore the pages of history and the beaches of Normandy as they receive extraordinary lessons in leadership."

Running from June 11 to June 22, the Normandy Scholars Program involves three days of intensive study at the National World War II Museum in New Orleans followed by eight days of travel to France. During the study-abroad portion of the trip, students will visit the Normandy battlefields, cemeteries, and monuments to the fallen Allied soldiers who made the liberation of Europe possible.

The Museum's Normandy program has been supported by the John R. Whitman Normandy Scholarship fund established by former New Jersey Governor, Christine Whitman, in honor of her late husband, John R. Whitman, a distinguished veteran of the Vietnam War. Their tour of Normandy so increased their awareness of the sacrifice of WWII veterans that they established a travel fund to provide a similar educational experience to college students.

Ms. Green heard about the program through Larry Greene, Ph.D. a Professor in the Department of History, who encouraged her to apply. Having taught Ms. Green for two semesters in his African American history sequence, Dr. Greene knew of her interest in World War II, especially the contributions of African American soldiers in the Normandy campaign and other battles. In speaking with Dr. Greene, she expressed her interesting in applying to the program to "enhance her historical skills and expand her knowledge of World War II and the countries involved."

In the personal statement and essay required by the program application, Ms. Green spoke about the courage, dedication, and sacrifice of American veterans. In particular, she discussed the contributions of the servicemen in her family who served in the United States Army, including an in-law who saw combat in the Vietnam War. She also noted the challenges that many veterans face upon their return. "Sometimes serving in war can bring about many negative effects for the individuals who are actually fighting," she wrote.

Indeed, the social and psychological impact of combat fall not only upon the soldiers, but also upon the civilian population and especially children who also face an increase in poverty and decline in education. As Ms. Green also noted in her essay, "Over half of the world's children who are out of school are assessed to live in conflict-affected fragile states." A strength of her essay was her perception that war impacts not only the combat soldier, but also the most vulnerable elements in a society—those affected by multiple exclusion based on gender, geography, income, and ethnicity.

You can read more about the Normandy Academy Program in this Star Ledger article, "D-Day remembered: Former Gov. Whitman honors husband by sending students to Normandy."