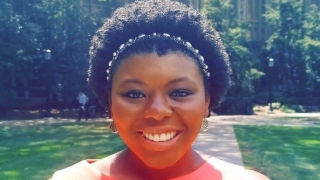 Nkili Cooper '20 is impressively busy. Not only is she working towards a major in History and minors in both Africana Studies and Women's Studies, she spent this past summer at the University of Michigan completing a research fellowship that aimed to mentor students who are interested in pursuing doctoral study.

Nkili was among a handful of students selected for the Big Ten Academic Alliance Summer Research Opportunities Program (SROP). She was particularly interested in the SROP fellowship because of the opportunity to research a topic she is interested in, but was also enticed by its extra offerings, including a GRE prep course and seminars dedicated to preparation for graduate school.

Over the course of the fellowship, Nkili worked with Dr. Angela Dillard, the Dean of Undergraduate Education and the Chair of the Department of African and AfroAmerican Studies, looking at the ways in which the tactics of the Civil Rights Movement changed from 1960 to 1965. Early on, she explained, "many attempted to use the judicial system to bring attention to the issue of discrimination in American society, which did not result in the realized change that many African Americans hoped it would." The tactics shifted by 1960 to sit-ins and direct action protests, "a change that segregationist whites resented and attempted to thwart by returning action with violence."

In her research, Nkili used both secondary and primary sources including newspapers from the period and previously classified FBI documents on the NAACP to compare the effectiveness of their tactics and found that the later nonviolent direct action protests were the most successful in lessening the prevalence of discrimination against African Americans.

When asked about the benefits of program, Nkili said she would recommend it to anyone "who want to improve their research and writing skills and want to know what it's like to do graduate level research. It's an incredible amount of work, so be prepared for high expectations. Take full advantage of opportunities because you learn so much through the process." Reflecting on what she gained, she commented how the experience "helped me fully realize my career goals and introduced me to grad level research. It was a lot of work, but also a lot of fun."

Dr. Thomas Rzeznik, the chair of the history department and one of the faculty members who wrote a letter of recommendation for Nkili, expressed the department's excitement to hear of Nkili's accomplishments. "It's wonderful to see students take advantage of such opportunities," he said. "I give credit to Nkili for taking the initiative to apply and am glad that she had such a transformative experience."

Among her many activities, Nkili is a member of the Dean's Undergraduate Student Cabinet, is in the process of helping to start a crafting club, is now the Student Academic Ambassador for the History Department in the Office of Undergraduate Admissions, and completed an internship at the Smithsonian Institution's National Museum of American History. She plans to pursue a Ph.D. in History and aspires to teach at the university level.