While other students were relaxing during Thanksgiving break, two history majors here at Seton Hall were getting ready to present their research at national conferences. Seniors Michael Novak and Kalliopi Logothetis – who are both participating in the History Department's honors research program – spent the break looking forward to their opportunity to share their work with students and scholars from across the country. 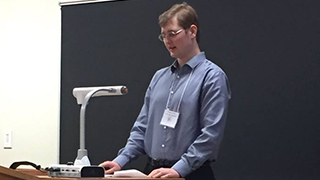 Michael, who is majoring in both History and Classical Studies, was selected to present his research on King William I of Sicily at the 13th Annual Moravian College Undergraduate Medieval Conference on December 1, 2018. The paper drew upon work that Michael had completed while taking a course on the High Middle Ages with Dr. Laura Wangerin. The conference brought together students from eighteen colleges and universities and included both paper presentations, craft demonstrations, and a concert with period instruments.

Michael's research sought to give a new interpretation of King William (1153-1189). While others looked at him as a terrible king whose reign led to a period of civil war, Michael argued that his poor reputation was partly due to the slander of his enemies. As Dr. Wangerin notes, the paper "challenged the received wisdom of the kind of ruler William was" by looking at both primary sources and the scholarly literature produced in the intervening centuries.

In reflecting on the experience, Michael remarked how exited he was "to be able to share my research with a broader audience" and to receive feedback on his work. "The best part of the experience," he noted, "was the opportunity to meet other people my age who have conducted research on similar topics and talk to them about their experiences." 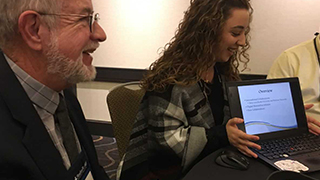 The weekend before Michael attended his conference, Kalliopi had the opportunity to join Dr. James Daly of the College of Education and Human Services at the National Council for the Social Studies annual conference in Chicago, Illinois. There, she shared research that she and fellow history and secondary education students Laura Abel and Emma Pearsaon have been doing on the Ukrainian diaspora, which has resulted in an interactive website that maps out immigration paths and shares the oral histories that they have collected. You can read more about their project and presentation here.

In speaking with the history department faculty about her experience, Kalliopi remarked how excited she was to be one of the few undergraduates at the conference. She also noted how "it was eye-opening to see how many resources exist for social studies teachers and the networking opportunities available."

Kalliopi was also delighted to discover how well-received her research was. Those who came to her presentation was "intrigued to find out more about the website" that she and the other students had developed and wanted to know "how to incorporate that type of work in their own research." Kalliopi encourages all undergraduates "to push their boundaries and do research that allows them to go conferences like these."

The work of Michael, Kalliopi, and other history majors highlights the innovative research being done by students in the humanities, as well as the tremendous opportunities they have to share their findings with peers and professionals alike.