In the first of its kind match-up, the Seton Hall Pirates challenged the Butler Bulldogs to a Rocket League game during the half-time of the BIG EAST men’s basketball game.

The match, months in the making, was over in just five minutes as the Pirates triumphed over the Bulldogs, 5-1. The match was streamed live, both in the Prudential Center to over 8,700 fans in attendance, and on the Official Big East Esports Twitch channel.

The match was made possible in partnership with Dignitas, an international esports team that fields teams in many of esports' largest and most popular games. Dignitas provided the team with state-of-the-art gaming PCs and equipment necessary for the match to take place at the concourse level of the Prudential Center.

Prior to the half-time showcase at the Prudential Center, the Pirates faced off against the Golden Eagles of Marquette. The team fought back from a 1-0 deficit to win 3-2. The win over the Golden Eagles puts the Pirates firmly in first place. The team is back in action on March 2nd, as they take on the Georgetown Hoyas. The match will be streamed live on the Official EGF Twitch channel. 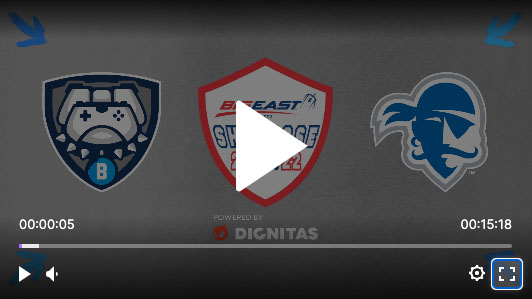 About Seton Hall Esports
A leader in the field, Seton Hall has had an esports club team since 2013. Among the first University gaming organizations in the state of New Jersey to be recognized, the team has been asked by a number of gaming organizations to provide insight into the future of collegiate gaming. The Seton Hall Esports team has played a pivotal role in the shaping and formation of league-sanctioned collegiate play. In November 2019, the University completed construction on a state-of-the-art computer lab and esports facility with dedicated and optimized computers for students' recreational and competitive use. The Pirates are Spring 2020 ESL-Big East League of Legends Champions, the 2020 BIG EAST-MAAC Esports Tournament Rocket League Champions, and the 2018 Big East Inaugural Rocket League Winter Invitational Champions.

ABOUT EGF
Founded in 2015, EGF is the national governing body for formalized collegiate D-I esports and high school level leagues. EGF’s youth, high school and D-I collegiate leagues are inspired by the best aspects of traditional sports to create opportunities for students and schools to engage and advance. For more information or to inquire about collegiate participation, please visit EGF.gg, follow @officialEGF on Twitter, Instagram and Twitch and Facebook or contact info@EGFederation.gg.

About Dignitas
Dignitas is an international esports team with one of the most iconic and recognizable brands in the professional gaming industry that fields teams in many of esports' largest and most popular games. Dignitas' innovative and authentic brand position offers a premier opportunity for partners seeking a direct portal into the gaming and esports market. In September 2016, Team Dignitas was acquired by the Philadelphia 76ers of the National Basketball Association. Dignitas is a part of the Harris Blitzer Sports & Entertainment family of innovative and competitive holdings owned by an investor group led by Managing Partners Josh Harris and David Blitzer, which also includes the New Jersey Devils of the National Hockey League, and the Prudential Center, a multi-purpose arena in Newark, N.J.