A Fresh Outlook on Teaching Inspires Our Newest Educators 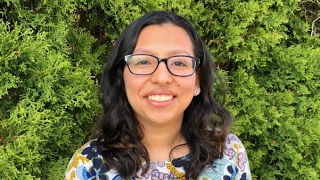 Everyone has a favorite teacher. Someone who inspired them, who cared about them. A teacher who understood where they were coming from. This year, as 45 education majors receive their baccalaureate degrees from Seton Hall, there will be a new group of compassionate, dedicated teachers in classrooms around the state, and beyond.

Students from the College of Education and Human Services' elementary and secondary education programs are "simply amazing," says Dean Maureen Gillette. "They are drawn to teach, deeply committed to their students and ready to apply the skills and the values they've learned these last four years. We could not be prouder of them." 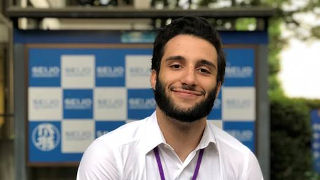 After earning his diploma from Seton Hall this month, James Lopez of Sayreville, New Jersey, will begin his career as an English teacher at North Brunswick High School. The son of parents who immigrated from Spain, James grew up in a diverse community but said he rarely saw teachers that looked like him and his friends, or spoke their languages. Those experiences, coupled with a strong desire to connect with people, motivated Lopez to become a teacher.

Classmate Claudia Valverde, who grew up in Hopelawn, New Jersey, and is graduating cum laude, will join Lopez at North Brunswick High School in the fall. Valverde says she missed seeing women of color leading her STEM classes when she was in high school. As a Latina she believes sharing a background similar to many of her students is important. Valverde's parents, who moved to the U.S. from Peru, have science backgrounds and encouraged her to "do great things." She considered studying medicine for a time but was eventually drawn to a path that allowed her to focus on science, while advancing her commitment to social justice. 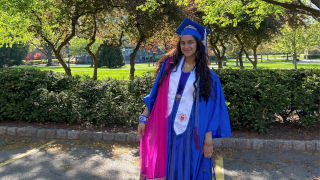 "Everything happens for a reason and will continue to build me into a stronger leader to voice change!" Marya Mahmood is the College's valedictorian candidate for 2020.

Along with her fellow secondary education majors, New York City native Marya Mahmood's perspective on teaching has been shaped by the experiences she had as a student. The College's valedictorian candidate for 2020, she is currently student teaching at Newark's Science Park High School. Mahmood moved to New Jersey as a teenager and struggled with difficulties at home and discrimination in school. "People weren't used to seeing a woman wearing a hijab," she explains. "The verbal and physical attacks I received showed me that our world needs education in matters of social justice." Mahmood's dream has been to teach in an urban school district where she can work, live, and dedicate herself to the community. She'll be doing just that when Science Park re-opens and she returns to teach history. "I'm excited to go back to an environment that is similar to where I am from. The issues will be different than when I was in high school, but I can relate to them because of my own experience."

A Culturally Responsive Approach
The last few years have been a period of growth and change for the College's secondary education program. Grounded in research on urban education, aspiring high school teachers are learning how to bring cultural responsiveness to the classroom. "It's important that our students are prepared to teach in any area they want," says Professor Edmund Adjapong, Ph.D., who has been involved in reimagining the program. Adjapong believes teachers need a deep understanding of their students' diverse backgrounds and should be equipped to engage with them in the classroom on issues that matter. "Everybody needs to have those challenging and difficult conversations," Adjapong says. "Students of color are more open to having them because of their experiences. But students in general need to know about this as well."

Seasoned educators like Adjapong, who taught in the Bronx before coming to Seton Hall, have been a source of inspiration for students at Seton Hall. "Our professors have been very supportive. They facilitated conversations and got me involved in expanding my experiences in education," explains Valverde. Over the last four years, she says her professors have shared their own sense of the importance of mentoring students and helping a new generation succeed.

"I've had the opportunity to be a teaching assistant, make hip-hop connections with Dr. Adjapong, and drop into Dr. Katz's office literally whenever I wanted," says Lopez. A presentation by Dr. Chris Emdin, who wrote For White Folks Who Teach in the Hood: …and the Rest of Y'all Too, inspired Lopez's approach to teaching. "I loved the methods and pedagogies Dr. Emdin illustrated in his book and it helped me become a culturally responsive teacher with a focus on social justice in the classroom."

Lopez said that when Emdin came to speak at Seton Hall last spring, he felt as if he was meeting a super hero. "Dr. Emdin spoke with such verve and confidence about the importance of culturally responsive teaching that I felt like a there was a fire being lit in my stomach and I wanted to jump out of my seat and just start teaching a classroom full of students. Whenever things are rough and I begin to doubt myself, I always think back to the feeling I had watching Dr Emdin."

Thinking about the graduates who will soon be leading classrooms of their own, Adjapong says his young teachers are well prepared. What they've learned and what they plan to do after graduation aligns with Seton Hall's mission of servant leadership. He adds that they have been taught to develop agency, to speak out on issues and teach through a social justice lens. "I think they will be very powerful and inspiring educators."