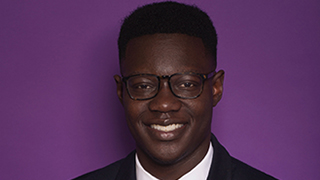 Assistant Professor Edmund Adjapong, Ph.D. has been selected to receive the New Scholar Creativity and Pedagogy 2017 Award from the University of Calgary. He has also been appointed as a Faculty Fellow at the Institute of Urban and Minority Education at Teachers College, Columbia University.

Adjapong is a Professor of Education Studies and believes that every student has the ability to learn, yet in very individual ways. "It's about breaking down barriers to learning and preparing teachers to be effective in any space," he says. Adjapong has dedicated himself to promoting equitable practices in STEM classrooms, especially in urban settings.

The New Scholar Creativity and Pedagogy 2017 Award celebrates professors who create innovative pedagogy for marginalized students. Adjapong is the Director of the Science Genius Program, where he incorporates hip-hop elements into science. He recognizes that hip-hop can be viewed negatively in the media; however, his work aims to show the power of the medium as extremely effective in academic settings.

He says he was inspired to incorporate this style of teaching by his ninth grade teacher. "He was my inspiration for incorporating hip-hop into science. Prior to him, science was not engaging to me. He attached scientific principles to my identity on a personal level, making it more hands on, and allowing us to bring our outside selves into the classroom."

Columbia University, through appointing Adjapong as a Faculty Fellow, is providing a space for him to continue his research of hip-hop as a part of science. The Institute of Urban and Minority Education has partnerships with many area schools that will allow him to extend the reach of his work.

As a part of his award from the University of Calgary, Adjapong will be a keynote speaker at their February 28 conference called Creativity, Science & Social Science: Empowering Pedagogies for Youth and Educators. This conference brings together scholars in the sciences and social sciences in order to engage in dialogue around the connections between these broad fields.