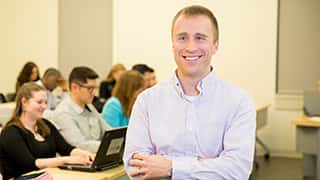 Robert Kelchen, Ph.D., associate professor of higher education and chairman, Department of Education Leadership, Management and Policy in the College of Education and Human Services, has been recognized by the prestigious publication Education Week, and the American Enterprise Institute think tank as number 34 in a ranking of the top 200 United States education scholars and public influencers for 2020.

The 2020 Edu-Scholar Public Influence Rankings, compiled by AEI's Frederick M. Hess, director of education policy studies spotlights 200 scholars credited with moving ideas from academic journals into the national conversation. Hess shared that the ranking is a way to honor education scholars who had the biggest influence on the nation's education discourse by ranking the university-based scholars in the U.S. who did the most last year to shape educational practice and policy out of an estimated 20,000 faculty in the nation researching education.

"As I see it, the extraordinary public scholar excels in five areas: disciplinary scholarship, policy analysis and popular writing, convening and shepherding collaborations, providing incisive commentary, and speaking in the public square. The scholars who are skilled in most or all of these areas can cross boundaries, foster crucial collaborations, spark fresh thinking, and bring research into the world of policy and practice in smart and useful ways," Hess explained.

Kelchen also was recognized in Education Week's related ranking of the top ten influential faculty in five particular categories. He was highlighted as number seven in the area of Government and Policy.

"It is important for me as a professor to be involved in educational policy discussions to help lawmakers and government agencies make better decisions. Talking with media outlets helps bring research to the broader public, and also spreads the Seton Hall name around the country," said Kelchen.

It is significant to recognize faculty who translate research into policy and are publicly engaged so they can impact education policy discussions and to be able to connect around important issues with other educators and policy makers as well as the greater community, explained Kelchen.

Engaging in this discipline is equally important to a new generation of educators being trained at Seton Hall, Kelchen shared.

"Looking ahead, there are critical discussions around legislation taking place now around higher education accountability and affordability as part of the upcoming 2020 presidential campaign, in our state houses, and in Congress. While think tanks and advocacy groups are weighing in, it is essential to have trained education scholars involved in these public policy conversations who can be objective and make sure accountability measures ensure students are receiving degrees worth their time and money," he explained.