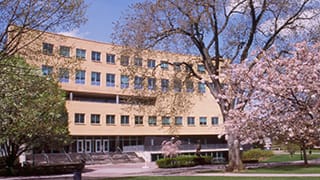 Binder received the Hanbury Mission Award, given in memory of Reverend Monsignor Kevin M. Hanbury to an alumnus from the College who embodies the passion for service that Monsignor Hanbury had throughout his life. Associate Professor May accepted the Schreitmueller Faculty Servant Leader Award, presented to a faculty member who demonstrates outstanding service to the College through dedicated years of teaching, mentoring and leadership.

In accepting her award, May expressed how being honored for her efforts was truly overwhelming and that "an opportunity to teach fellow teachers is the best job in the world." She went further to acknowledge her stepfather as the inspiration that brought her to a life in education, stating, "He serves as a role model for helping others, seeking nothing in return, and exemplifying the concept of 'paying it forward.' This is his moment as well as mine because he always believed in me and the power of education."

After being presented with the Hanbury Award, Binder's speech also included gratitude to his inspiration, "Monsignor Hanbury was a friend to me. He gave me guidance throughout my career. He exemplified servant leadership. That it's about giving opportunity to learn-and to fail. And the freedom to learn from failure."

A highlight of the evening came when Monsignor Hanbury's brother, Raymond Hanbury, Ph.D., and his wife Pat presented Maureen Gillette, Ph.D., Dean of the College of Education and Human Services, with a hand-held version of the statue of Mother Seton featured prominently in front of Jubilee Hall. The original statue was also given as a gift to Seton Hall University from the Hanbury family.

Giving was the overarching theme of the evening. Hanbury urged students to continue giving back as Seton Hall has given to them. Dean Gillette then ended the ceremony by affirming the sentiment, stating, "We are bound together by a commitment to service through the helping professions in the three areas of our college: Educational Studies, Educational Leadership and Professional Psychology & Family Therapy." 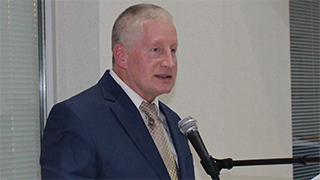 Charles Binder '04 recently retired after 27 years of service as a lieutenant with the NJ Division of Parole. He also served for 25 years with the US Coast Guard Reserve. He is currently an adult leader in the Northern NJ Council of the Boy Scouts, an organization he has volunteered with for over two decades. An Eagle Scout himself, and active in the Catholic Communities on Scouting, Binder has mentored hundreds of young scouts, helping them understand and appreciate citizenship and community service and gain a greater understanding of their Catholic faith.

Binder's dedication to empowering youth has been evidenced in organizing events such as National Night Out Against Crime in cities across northern New Jersey and Back-Pack to School, which provided school supplies for Paterson students.

Through his involvement in the American Legion Boys State Program he led the selection of students from Rutherford and St. Mary High Schools to participate in a weeklong program to learn about how the New Jersey government functions.

Beyond his dedication to youth, Binder has also led initiatives to support his community at-large. One of his most successful efforts was a clean-up of the Jersey City Heights Reservoir in partnership with NJ Parole Officers, Hudson County Jail Staff, and Seton Hall's Division of Volunteer Efforts. 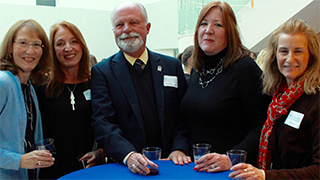 Grace May, Ph.D. teaches in the integrated elementary and special education program. Her research interests have included quality of life issues for adults with intellectual disabilities, cognitive development in children with intellectual disabilities, and the development of teacher dispositions. Currently she is a member of the Catholic Inclusion Education Advisory Committee in the Archdiocese of Newark and collaborates with colleagues in speech and language pathology in development of an Interprofessional Conference on Autism. May is involved in a grant and pilot project with two community partners to expand and improve transition opportunities for students with disabilities and is also overseeing the college pilot use of the edTPA.

May has served the university in multiple roles including dean and acting dean of the College of Education and Human Services, associate dean for assessment and accreditation, NCATE accreditation coordinator for two successful accreditation visits, and program director of the elementary/special education program.