Derrick Nelson, Ed.D. '13: A Life in Service to Others 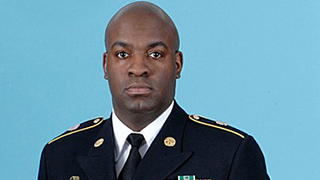 Derrick Nelson, Ed.D. '13, principal of Westfield High School, recently passed away from complications of a bone marrow transplant donor operation to aid a 14-year-old boy in France whom he had never met. His selfless sacrifice was indicative of an entire life's work for the greater good of others. So influential were his efforts that the enormous outpouring of grief through vigils and tributes, including one from NJ Governor Phil Murphy, was televised throughout the tri-state area. Derrick Nelson personified the true meaning of servant leadership, which is at the heart of Seton Hall University's mission.

Long before Nelson earned his doctorate in K-12 School Administration from Seton Hall, he served his country in the U.S. Army Reserves for 20 years, during which he volunteered as a drill instructor for reserve units mobilizing to Iraq and Afghanistan. Nelson himself was ultimately deployed to Afghanistan in 2013, transitioning from master sergeant to chemical, biological, radiological and nuclear warrant officer. He also spent brief periods working in public relations and marketing prior to the transition to education.

According to Nelson's Executive Ed.D. cohort student profile, his "nagging itch" to teach encouraged him to leave marketing and take his first teaching position at Washington Elementary School in his hometown of Plainfield. During this time, he obtained his master's degree in Educational Administration from Saint Peter's University and subsequently attained his first administration position as assistant principal at Park Avenue Elementary public schools in Orange.

His career as a K-12 administrator is a veritable guidebook of leadership accomplishments. While still a teacher at Washington Elementary, Nelson implemented the Reader's and Writer's Workshop curriculum and designed the curriculum mapping for the fourth grade Everyday Math Program. As assistant principal at Park Avenue Elementary, he started the "Men on a Mission" organization, which brought fathers of students together with staff to create a mentorship program for fifth through seventh grade boys. Following his unanimous appointment by the Board of Education as principal of Westfield High School in February 2017, Nelson modernized technology and instituted their engineering program.

The Nu Lambda Lambda chapter of Omega Psi Phi, of which Nelson was a lifetime member, recently named him "Educator of the Year."

"Fiercely committed" and "fiercely loyal to his students, to his staff, and to the entire Westfield community" was a sentiment expressed by one of his teachers but echoed by the many people whose lives he affected.

Gov. Phil Murphy remarked that Nelson "embodied all that makes New Jersey great. His final act was one of selflessness." According to everyone who knew him, putting others ahead of himself was the model for his life.

Martin Finkelstein, Ph.D., professor in the Department of Education Leadership, Management and Policy, who served as Nelson's dissertation adviser noted, "Derrick was a gentleman and a gentle soul. If all students were like him, I wouldn’t be retiring."

Paul Valenzano, a counselor at Westfield High School, stated, "Whether it was the work he did in education with youths or how he served his country and even the selflessness that led up to this tragedy—all things point to the fact that he was a true American hero. He was called. He served. He is counted."

A college fund has been established for Derrick Nelson's 5-year-old daughter, Morgan. Checks can be made payable to: Sheronda S. Braker for the benefit of Morgan K. Nelson. Please use the following account number: 7805-9027.