All in the Family: Counseling Psychology Ph.D. Student Follows in Father's Footsteps 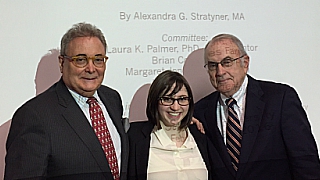 The Counseling Psychology Ph.D. program will have the pleasure of hooding a legacy student at commencement this May. Alexandra Stratyner is a 5th year student and successfully defended her dissertation on February 29th. Miss Stratyner, or as she is fondly referred to in the program, Alex, followed in her father's footsteps in her quest to earn a doctoral degree in counseling psychology at Seton Hall.

Alex's father, Dr. Harris Stratyner, graduated from Seton Hall in 1997. His dissertation was titled “The Relationship of Readiness to Change and Health Attribution Locus of Control to Addiction Severity in Dually Diagnosed Individuals.” Alex also chose to focus on addiction for her dissertation which looked at the influence of cannabis use in doctoral psychology trainees, and their perceptions of cannabis risk as well as attitudes toward substance use, on their ability to identify Cannabis Use Disorder. Counseling Psychology Associate Professor, Dr. John Smith, had the pleasure of both mentoring Dr. Harris Stratyner for his dissertation, as well as serving on Alex's dissertation committee.

Currently, Dr. Harris Stratyner runs a private practice specializing in the treatment of addiction and co-occurring disorders. He also serves as the Regional Clinical Vice President of Caron New York Recovery Services and is a Clinical Associate Professor in the Department of Psychiatry at Mount Sinai School of Medicine. Dr. Stratyner was the first Ph.D. appointed Division Director of Chemical Dependency at New York-Presbyterian Hospital, Weill Cornell Westchester. There he founded The Retreat at Westchester, a world renowned addiction program. Additionally, Dr. Stratyner was awarded an honorary Doctorate in 2005 from Mercy College for his work on developing his theory of “Carefrontation.” He was been featured in numerous magazines, websites, and television networks including The New York Times, ABC, CBS, CNN, and NBC, as well as hosting a weekly radio show for over 25 years.

As for his daughter, Alex has lived up to the legacy set forth by her father by building an impressive CV and earning a master's degree in counseling psychology during her doctoral career. She is currently completing her predoctoral internship at Mount Sinai St. Luke's and Mount Sinai West Hospitals in New York City. Alex and her father also presented a symposium entitled “Not Far from the Tree: The Second-Generation Psychologist Phenomenon as a Context for Training,” along with her classmate, Brienne Brown, M.A., Brienne's mother, Dr. Donalee Brown (who also graduated from Seton Hall's Counseling Psychology Ph.D. program), and PPFT professor, Dr. Peggy Farrelly. This symposium was presented in March 2014 at the APA Division 17 Society of Counseling Psychology Conference and examined professional and clinical issues related to parent and child identities as first- and second-generation psychologists.

After commencement this May, Alex plans on joining her father's practice. All that's left to figure out is who's now being referred to when “Dr. Stratyner” is being addressed.