At the School of Diplomacy, students are encouraged to participate in study abroad programs, which provide students with an invaluable and rewarding opportunity to experience other cultures, improve foreign language skills, and practice diplomacy. 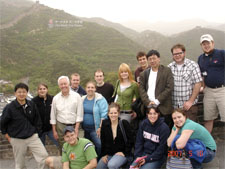 The School of Diplomacy sponsors unique study seminars, where the theory and practice of diplomacy converge. Each trip offers an intensive study of international affairs in a key institution or region. During each three-credit course, students are immersed in political, social, economic and cultural issues as a diplomatic delegation. Students maintain a demanding itinerary and are received by dignitaries and high-ranking officials at every destination. These seminars, led by the Dean and faculty of the School, have included the following.

The African Union Seminar examines conflicts in Africa and the AU's role in conflict resolution from the AU headquarters in Ethiopia. A tour of rural Ethiopia provides students with first-hand experience of Africa's development and security needs. Students are received by the AU Commissioner, the UN Economic Commission for Africa, the US Embassy, USAID, and the Ethiopian Ministry of Foreign Affairs.

Our study tour to the Basque Country, Spain explores how different actors and institutions address processes of dealing with the contentious past through education, justice, policymaking and art. Students interact with government officials in the Basque Parliament, civil society leaders, scholars, activists and artists and also visit cultural sights in Bilbao, San Sebastian, Guernica, Vitoria, Arantzazu and Mondragon.

The Catholic Peacemaking Seminar brings participants to Rome, Italy to immerse them in the practice of Catholic peacemaking as experienced through the offices of the Holy See and the work of the Community of Saint 'Egidio. The course is designed to familiarize students with the inner workings of Vatican diplomacy and of the non-governmental organizations dedicated to peacemaking by focusing on specific peace process case study examples.

The China Seminar investigates the opportunities and challenges of China's rise through visits to Beijing and Shanghai. Students engage officials at the Chinese Ministry of Foreign Affairs, Suzhou Industrial Park, US Embassy, American Chamber of Commerce, and more.

The Cyprus Seminar explores conflict from the Green Line, which divides the island and is maintained by UN Peacekeepers. Students study Cyprus' accession to the European Union and its role in the Cyprus conflict. Students are received by the President of Cyprus, the Turkish government, the President of the Cyprus Parliament, the UN Envoy, and EU Delegate. 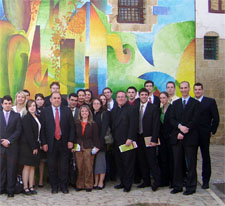 Our European Union Seminar visits Belgium, France, Luxembourg, Germany, and the Netherlands. Students learn about EU governance and Europe's trans-Atlantic relations through briefings by EU institutions and partners including NATO, European Parliament, European Court of Justice, US Mission to the EU, and the European Union Court of Human Rights.

The Kosovo Study Seminar examines the transition of Kosovo from its status as an autonomous province of Serbia within Yugoslavia to a subordinate part of Serbia to a newly independent country recognized by half the member states of the UN. Throughout this course, students consider the role of the UN and NATO in building institutions of governance, the difficulties of building a viable economy where none previously existed, and the post-independence prospects of the world's newest independent country. Students meet with senior officials of Kosovo, representatives of Serbian and Albanian communities and political party leaders.

The Portugal Seminar examines the role small states play in global affairs and international institutions. Through meetings with officials of organizations in Lisbon, students learn the strategies and resources states use to defend their interests and the benefits and constraints of membership in these organizations.

The United Nations Intensive Summer Study Program brings students to United Nations Headquarters in New York. Through extensive contact with UN diplomats and officials, participants are exposed to the inner workings of this vital organization and gain a deeper understanding of the challenges and opportunities it faces.