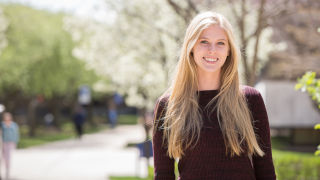 Emma Tobin, a diplomacy and philosophy double major from Half Moon Bay, C.A., recently became the third Seton Hall University student to be awarded a Truman Scholarship from the Harry S. Truman Scholarship Foundation. In addition, Tobin was recognized with a Critical Language Scholarship (CLS) from the U.S. Department of State to study Arabic language in Morocco and a Boren Award to study Urdu in India.

The Harry S. Truman Scholarship Foundation was created by Congress in 1975 to be the nation's living memorial to President Harry S. Truman. The Foundation has a mission to select and support the next generation of public service leaders. Recipients of the Truman Scholarship receive a $30,000 scholarship toward graduate school and the opportunity to participate in professional development programming to help prepare them for careers in public service leadership.

"The Truman Foundation gave me the opportunity to share my story and reinforce my interests and goals," said Tobin. "Through my scholarship, I will get to pursue my passions for both women's issues and conflict resolution. I intend to pursue a master's degree in international development with an eye toward working on humanitarian development projects aimed at eliminating gender inequality."

The application process for the Truman Scholarship is rigorous and highly competitive. In 2019, there were 840 candidates for the award nominated by 346 colleges and universities, a record number of both applications and institutions. The 199 finalists for the award were interviewed in March and early April at one of sixteen regional selection panels. Sixty-two new Truman Scholars were selected in 2019. 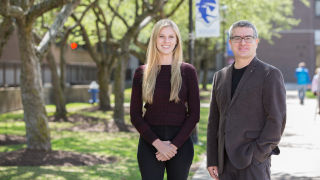 "Her success with the Truman Scholarship represents a high point for Emma and the University and puts her not only among our most accomplished students, but among the top young leaders nationally, as well," said Professor Matthew Escobar, Seton Hall's Fellowships Advisor. "We are all very excited to see new doors opening for her and I know that her work's impact will only increase. Emma's drive, eloquence and commitment to deeply held principles make us very proud to have her represent Seton Hall."

Tobin has also received a Critical Language Scholarship (CLS) from the U.S. Department of State to study Arabic language in Morocco and a Boren Award to study Urdu in India.

Both the CLS and Boren awards are highly competitive programs. The Critical Language Scholarship (CLS) Program is a language and cultural immersion program for American students enrolled at U.S. colleges and universities sponsored by the U.S. Department of State with funding provided by the U.S. Government. The Boren award provides undergraduate scholarships, graduate fellowships, and institutional grants for students to study less-commonly taught languages overseas.

"Emma is perfect for both the CLS and Truman awards because she has distinguished herself academically, while demonstrating a passion for language learning and public service," said Kyle Younger, Director of Professional Services at the School of Diplomacy and International Relations, who helped Tobin apply for both awards. "She is a true representative of what these competitive and prestigious scholarships stand for and will leave a mark as a global citizen."

Tobin is just one example of What Great Minds Can Do in Diplomacy and International Relations. Meet more members of our student and alumni community.