Seeking a New Perspective on Islam 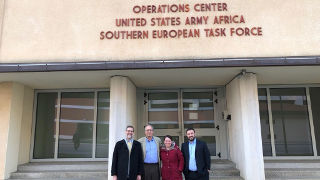 Administrators from the School of Diplomacy and International Relations recently took part in a leadership development training event at the U.S. Army Africa. Andrea Bartoli, and associate dean of external affairs, Elizabeth Halpin, were joined by celebrated author John Kiser and alumnus Mohamad Mirghahari, B.A. '02, M.A. '04, who coordinated the program. The event was designed for military, civilian leaders, and staff supporting US Army Africa's mission in Vicenza, Italy, in early February.

The visit was part of an initiative by the School's Emir Abd El-Kader Fellowship. With support from the William and Mary Greve Foundation, the fellowship is named for the 19th century Algerian warrior and scholar who emphasized peace between all religious groups and is still highly regarded for his scholarly work and commitment to human rights. Mirghahari, a Department of Defense and Homeland Security veteran, is Seton Hall's first Emir Abd El-Kader fellow.

Abd El-Kader was the subject of a biography written by John Kiser in 2007. The book entitled Commander of the Faithful: The Life and Times of Emir Abd El-Kader, delves into Abd El-Kader's past, explaining how he was respected by Muslims and Christians alike, even receiving gifts from well-known people such as President Abraham Lincoln. Although history is written by the victors, he says, Abd El-Kader's story was well documented around the world, even by the French oppressors he was fighting against. Through his literary work and public engagements like the one at the Africa Mission, Kiser also promotes religious understanding by focusing on innovations in the field, rather than on divisive factors.

During the event, "Kiser was able to engage with both the officers and enlisted corps to introduce a counter narrative of Islam through the example of Emir Abd El-Kader, and the impact of his life in history to modern day Algeria and the Islamic world," says Emir Abd el Kader Fellow, Mohamad Mirghahari.

The soldiers also watched a film based on another one of Kiser's book, The Monks of Tibhirine: Faith, Love and Terror, and took part in a question and answer session afterward. The film examines the gripping story of a group of seven Trappist monks whose kidnapping and gruesome death in war-torn Algeria riveted France in 1996. The book and film explore how this group of Christian religious were embraced and loved by the Muslim community in the village where the monastery was based.

To conclude the event, the leadership team was invited to a group discussion with U.S. Army Africa G2 Intelligence Operations Division analysts for the Command. The School is exploring ways to continue to provide thought leadership and tailored educational programs in partnership with the U.S. military in the future.

U.S. Army Africa, created in 1955, is a U.S. Defense Department's geographic combatant command site, one of six around the world. U.S. Army Africa is responsible to the Secretary of Defense for military relations with African nations, the African Union, and African regional security organizations. It has witnessed the restructuring of the African exercise program to address regional concerns, built multilateral relationships and supports a shared vision of 54 stable, secure nations.