Mass atrocities have shaken the world to its core for decades. Memories of those lost and the callous agendas motivating the crimes committed against them have tested the understanding of societies and scholars alike as we seek to prevent such evil from perpetrating our world. In a united effort to achieve this, states involved in the Prevention of Genocide Network as well as those working as co-facilitators of the National Focal Point Initiative for the Responsibility to Protect (R2P), joined together to create Global Action Against Mass Atrocity Crimes (GAAMAC). This community focuses on the prevention of mass atrocity crimes at both the national and regional levels by supporting countries in the development of preventive strategies. Our own Dean, Dr. Andrea Bartoli, has been intimately involved with GAAMAC, serving on its steering committee and sustaining a connection between the School of Diplomacy and this active human rights organization. In the past, this relationship has provided opportunities for Diplomacy students to present their research at GAAMAC conferences, creating forums for students to hone their research skills while engaging with major players in the international human rights community. 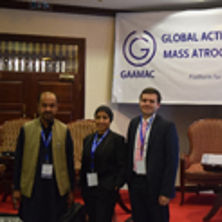 This summer, student-faculty collaboration in GAAMAC expanded beyond American borders. M.A./M.B.A. candidate Emanuel Hernández represented the School at the "GAAMAC III: Making Prevention a Reality" conference, held in Kampala, Uganda this May. The opportunity to serve as the School's eyes and ears at this government-focused gathering has its roots in Emanuel's individual initiative. After seeing a call for students interested in mass atrocity issues, Emanuel contacted the Dean and asked how he could contribute to this critical conversation. This initial outreach grew into multiple one-on-one meetings between the two, where they discussed ways to expand GAAMAC student participation and opportunities on campus that would allow other members of the Diplomacy community to engage on these issues together. As part of their dialogue, Bartoli asked Emanuel if he would attend GAAMAC III on behalf of the School. It was an invitation that Emanuel was all too grateful to accept. 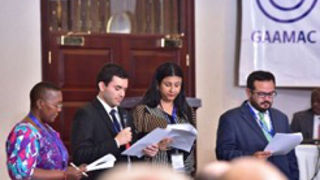 During his time at the conference, Emanuel had a front row seat as government and civil society leaders discuss atrocity prevention using national architectures, the consequences of failure, and ways to learn from successful prevention systems. In addition to his observational responsibilities, Emanuel was selected to facilitate the panel, "The Role of Youth and Education in Atrocity Prevention'; moderating comments on the subject from representatives of the Gulf Centre for Human Rights and the Youth Association for Development. This experience was an international exchange of ideas on what constitutes best practices of atrocity prevention; a forum for connections between past lessons and future policy. Prior to leaving, Emanuel expressed his excitement to attend the conference, saying, "I am looking forward to putting what I've learned in the classroom into practice while networking with experienced diplomats at this international conference."

Upon his return, Emanuel was elated to discuss his time in Uganda with GAAMAC. "One of the biggest highlights of my experience," Emanuel shared, "Was facilitating a panel on the role of youth and education in atrocity prevention. As a young researcher from Colombia, I firmly believe that education can foster diversity and tolerance. The youth are often among the most vulnerable victims of mass atrocities, but they can also be leveraged into stakeholders and agents of atrocity prevention. The panel was a great opportunity to share specific practices to empower the youth." Dean Bartoli was also very confident in his chosen delegate, noting that Emanuel is "very contentious and a good listener," and that his trip to GAAMAC III is a critical step in developing a larger GAAMAC team here at the School.

A desire to be actively involved in the prevention and resolution of major world issues, prior to completing an academic degree, drives Diplomacy students to take advantage of the School's unique opportunities. They bring their passions to the world stage as UN Youth Representatives, Department of State interns, and much more. Emanuel's journey to GAAMAC III is a new form of this consistent engagement with the difficult realities of our world. Through experiences like these, students at both the undergraduate and graduate levels connect their classroom learning with the concerns that necessitate a study of diplomacy. As a Diplomacy community, we look forward to sharing the stories of our students as they continue to pursue positive change throughout the globe.

To learn more about GAAMAC and its work, please visit: http://www.gaamac.org/.