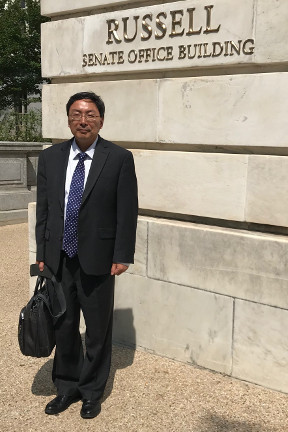 Yanzhong Huang, director of the Center for Global Health Studies at the School of Diplomacy and International Relations and senior fellow for global health at the Council on Foreign Relations, testified before a bipartisan congressional panel on U.S. - China healthcare links.

At the hearing, titled "Exploring the Growing U.S. Reliance on China's Biotech and Pharmaceutical Products," Huang testified before the U.S.-China Economic and Security Review Commission on the issue of U.S. companies' access to China's healthcare marketplace.

Huang said China's healthcare market "increased from $357 billion in 2011 to $761 billion in 2017. Growth is expected to continue and by 2020 it is estimated to reach $1.19 trillion. Driven by rapid population aging, a growing burden of noncommunicable diseases, the emergence of a sizable middle class, and advancement in technology, the trend is expected to sustain in the coming decade."

To cope with an expanding market, Huang offered several recommendations for policymakers and private companies to take. Huang recommended the U.S. government increase its healthcare-related research and development, support American companies' access to China's healthcare market, urge the Chinese government to eliminate "unnecessary or unreasonable regulatory burdens" on foreign companies working in China, support the private hospitals in China and open the U.S.-China Social and Cultural Dialogue as a high-level forum to discuss healthcare cooperation.

Huang is a sought-out expert on global public health issues. He has written extensively on global health governance, health diplomacy, health security and public health in China and East Asia. He has published numerous reports, journal articles, and book chapters, including articles in Survival, Foreign Affairs, Bioterrorism and Biosecurity, and Journal of Contemporary China, as well as op-ed pieces appearing in the New York Times, International Herald Tribune, The Diplomat and CNN's Fareed Zakaria GPS, among others.

Huang directs the Center for Global Health Studies, which serves as a think tank and resource center on issues relating to health, governance, and security. The School of Diplomacy is the first professional school of international relations in the U.S. to offer an academic concentration that explicitly addresses the international security and foreign policy aspects of health issues.