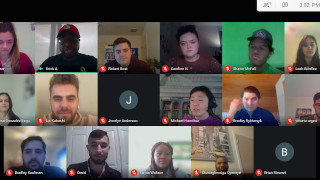 The NSF Research Team meets regularly to discuss their research.

This year's National Security Fellowship (NSF) graduate student research team spent the past year researching, writing, and designing a paper and presentation, culminating in a product entitled "Reimagining Counterterrorism in the Age of Great Power Competition: Optimizing U.S. Programs and Strategic Partnerships." The NSF team was tasked by the Department of Defense Directorate for Intelligence, J-2 who supports the Chairman of the Joint Chiefs of Staff, the Secretary of Defense, Joint Staff and Unified Commands with a requirement regarding the role of counterterrorism operations within a Great Power competition framework. They presented their findings not only to the senior analyst at the Pentagon who assigned their research topic; but also to senior officials in the National Security Council at the White House; the Department of Defense Joint Staff, Directorate for Intelligence, J2, AFRICOM officials and representatives from USAID, the United States Institute of Peace (USIP), and the National Guard; and finally to United States Special Operations Command South (SOCSOUTH) officials.

The NSF students received positive feedback from officials to whom they presented their research and from others within the Department to whom the project was disseminated. In recognition of their hard work and support from the School of Diplomacy and International Relations, the students and University were awarded with Certifications of Recognition and Appreciation from Rear Adm. Whitworth, the Director for Intelligence and the J-2 staff at the Pentagon.

Throughout the year, Mr. Mirghahari organized several guest speakers who were able to listen to the students' research ideas and recommendations as they were developing them, as well as provide helpful insights into areas of the project they had not yet considered. Some of the speakers included: the Defense Attaché Office for the U.S. Embassy in Nicaragua; Colonel Eric Lyon of U.S. Army Futures Command; Lieutenant Colonel Paul Thompson; Task Force Commander Special Operations Command Africa, and Justin Zeefe – CEO of NISOS.

The students also had the opportunity to present preliminary findings to Ben Rhodes, former Deputy National Security Advisor under President Barack Obama. His invaluable feedback, as well as the countless others' the students had a chance to speak with and learn from throughout the year, allowed the students to alter their research and writing process in the most fruitful way possible.

In looking back at the experiences from this year's fellowship, first-year student Jocelyn Anderson expressed her gratitude:

During a time when I have suffered loss, as so many people have in the last year, the truly fulfilling work of this project and the admiration I have for my colleagues and Mr. Mirghahari helped keep me on my feet. The levels at which we were able to present our work, as well as the amazing individuals we were able to engage with and learn from, was such an honor for me and beyond what I could have anticipated when I started on my path at Seton Hall.
Second-year graduate student Leah Bordlee highlights her "newfound confidence in my ability to advocate for policy change in pursuit of supporting the United States Government, which has better prepared me for taking steps after graduation in pursuit of a career."

As the fellowship's first women student leads, Caroline Hall and Becca Blaser underscore the meaningful relationships and experiences they gained over the past two years. As Hall mentions: "being part of NSF for both years of graduate school helped me learn about U.S. policy and how we can use resources we already have to create something more useful. Special thanks goes to Mr. Mirghahari for working with us and giving us this opportunity."
Blaser adds: "my participation in NSF is one of my proudest accomplishments and best takeaways from graduate school. The opportunity to present to high-level officials and write a detailed policy paper, coupled with the connections we were able to form with other diplomacy students, is an experience I will never forget."

In hearing about the fellowship for the first time, second-year graduate student Chimdi Chukwukere notes:

I was particularly impressed reading about Oluwagbemiga Oyeneye's (a fellow Nigerian) leadership and contribution to the success of the fellowship teams of 2018 and 2019. So, coming from Nigeria to Seton Hall, this was one of those programs I was praying to be part of.

Once I was invited and accepted for this, I knew this was going to be a big learning experience for me. I expected this fellowship to stretch and increase my capacity to engage in real world affairs and…I must say that it exceeded my expectation in every way possible. Professor Mirghahari gave us unforgettable experiences and exposures, beyond classroom reading and lectures.