Peace Be with Us 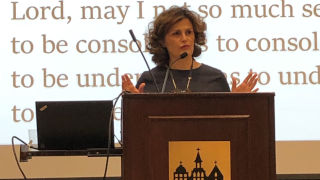 Quoting Mother Teresa, Ines Murzaku, professor of religion, said the path to a life of nonviolence began with "sowing the seeds of peace at home."

A diverse group of seekers from the Seton Hall community came together last week to deepen their understanding of what it means to live a life of nonviolence. For those who took part in the two-day Just Peacemaking Conference, the first of its kind at Seton Hall, there was no shortage of inspiration. Guided by the words and practice of some of the world's most admired peacemakers, among them Pope Francis, Mother Teresa, Thomas Merton, Martin Luther King, Jr. and Mahatma Gandhi, the group came together with open hearts and open minds.

The conference was co-sponsored by the Catholic Nonviolence Initiative (a project of Pax Christi International), the Center for Catholic Studies, the Community of Sant 'Egidio, the University Core, the Department of Religion, the Immaculate Conception Seminary, Jewish-Christian Studies, the Program in Catholic Studies, and the School of Diplomacy and International Relations. Scholars from different disciplines and people representing varied walks of life—educators, social scientists, high school and college students and activists were among the participants. Together, they learned how Catholics are contributing to peacemaking efforts aimed at stifling poverty, gun violence, racism, environmental assault, and other social challenges. Cardinal Joseph Tobin, head of the Newark Archdiocese, offered an opening prayer and asked the group to consider what it means to be disciples of Jesus in the world today.

By hosting the Peace Conference, Seton Hall joined the ranks of many Catholic academic institutions around the world that are responding to Pope Francis' call to become "involved in planting the seeds of peace." In his comments, University President Joseph Nyre said that, "Great minds are called to engage in the great conversations, challenges and debates of our time. I believe there is no challenge greater—and no conversation more vital—than how to reduce violence, a scourge that has plagued humanity almost since the time of creation."

"We all have more power than we think. Seton Hall can play an important role in that transformation to make change possible."
—Ken Butigan, DePaul University

The keynote address by Cardinal Peter Turkson, who has played a leading role in spreading Pope Francis' concern for justice, peace and human rights, was given by proxy. Speaking for the Cardinal, Fr. Christopher Mahar, who has worked closely with him on social justice matters, said that Turkson wanted to remind us that "Jesus's whole life bore witness to peace through nonviolence. To believe in Christ is to believe in peace. To be a Christian is to be a bearer of peace in whatever house you enter." 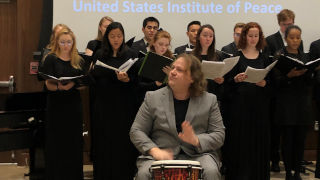 The Seton Hall University Chamber Choir, under the direction of Maestro Jason Tramm performed at Seton Hall's conference on Just Peacemaking Through Nonviolence.

Turkson's address highlighted the diplomatic efforts made by the Vatican to intervene quietly on state and multinational issues, including the proliferation of nuclear weapons, economic inequality, the refugee crisis and climate change. "The Church," he wrote, "can speak to everyone, because it has everyone at heart. The Holy See is at the service of Peace."

Finding Paths to Peace
Following Turkson's address, conference participants heard from members of Seton Hall's faculty and leading thinkers on nonviolence from other universities and organizations dedicated to supporting peace initiatives in the Catholic church. Several panelists explored the concept of peace that is embedded in the social teaching of the Church and plays a role in all religions.

Eli McCarthy, director of Catholic Nonviolence Initiative, spoke about strategies that are being advanced within the Church and efforts to deepen the commitment to peace in parishes worldwide. Pope Francis, he noted, chose nonviolence as the theme of World Day of Peace in 2017. "Energy and commitment by Catholics to nonviolence is spreading through campaigns and university events around the U.S," McCarthy said, adding that active nonviolence is a spiritual practice.

Several speakers talked about the importance of addressing social issues such as poverty and racism and their link to violence. "Why is violence so prevalent in our world?" asked Professor Ki Joo Choi, chair of the Department of Religion at Seton Hall. "It is because we live in a world where injustice foments violence as a tool. If violence is the only way to survive in this world, then what kind of world are we living in?" The Gospel, he said, offers a better way. He called upon listeners to reject the "prevailing social order" and embrace nonviolence as a means of addressing injustice. "Stand in solidarity with those who are socially marginalized and oppressed, even if that means engaging in civil disobedience and protest."

The audience was also reminded about the impact of ordinary acts nonviolence. "Show up in small ways," urged Peter Savastano, associate professor of the Anthropology of Religion, Consciousness, Sexuality and Gender at Seton Hall. Voting, signing petitions, contacting legislators, and attending board meetings, he said, can move society toward greater justice and gives people a chance to express their commitment to nonviolence in their own way. Savastano spoke about the influence of American social activists including Dorothy Day, Daniel Seeger and the Trappist monk and mystic, Thomas Merton, who he cited as one of the most influential voices on nonviolence in the 20th century. Merton, like Gandhi, he said, believed that prayer must be part of a nonviolent life. Personal practices, such as prayer and meditation, are important elements of a nonviolent life, Savastano shared. He said that in his own practice, he considers putting down his phone a form of meditation. "This is the hard work of being transformed that makes it possible to live a life of nonviolence. We have to have the right relationships to ourselves, to other human beings, to all creation, and to technology." 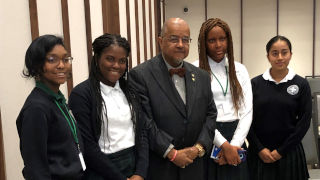 Reverand Forrest Pritchett met with students from the St. Dominic Academy who were attending the Peace Conference.

Forrest Pritchett, director of the MLK Jr. Scholars Program at Seton Hall, movingly recalled his own encounters with racism as a college student in the south in the early 1960s. The violence and discrimination he was met with, after growing up in New Jersey where racist acts were less overt at the time, led him to join the Student Nonviolent Coordinating Committee. SNCC was one of the most effective grassroots organizing efforts of the civil rights movement. Pritchett volunteered with the committee's weekend school program which taught people how to read and write. Pritchett said the schools had a great impact at the time and challenged students in the audience to set up their own programs. "Seton Hall will be an ally in your effort," he said.

Mother Teresa's life as a peacemaker was also explored in a breakout session on the second day of the conference. Ines Murzaku, Director of Seton Hall’s Catholic Studies program, painted a picture of a young Albanian woman who had witnessed the atrocities of war and genocide in her religiously and ethnically diverse homeland. Mother Teresa worked among the poorest of the poor mainly in India and implored others to "find their own Calcutta," by "sowing seeds of peace among family members" at home.

Maria Stephan, co-author with Erica Chenowith of the book, Why Civil Resistance Works, talked about the recent protests in Hong Kong and student-led climate strikes which she said were evidence that "people power" was advancing democratic values around the world. Stephan, who is the director of nonviolent action at the U.S. Institute of Peace, shared research data showing that nonviolent campaigns between 1900-2015 were more successful than those that relied on violence. Stephan explained that the size and diversity of resistance efforts was "the single most important variable in determining the outcome" of nonviolent campaigns, which tend to attract 11 times the number of participants than campaigns centered around violence. "When large numbers of people withdraw their consent—refuse to give labor, walk out of classrooms, or stop cooperating—no regime, no matter how brutal, can stay in power."

"Important conversations like these held at Seton Hall provide all of us struggling in today's complex, violent world with a road map for productive, peaceful activism to care for the good of all people," noted Elizabeth Halpin, associate dean in the School of Diplomacy.

One of the lessons of the conference, reflected Monsignor Richard Liddy, chair of the event's organizing committee, was that "nonviolence has to do with our own hearts. God wants us to be reconciled; he wants the Holy Spirit to be among us."

Categories: Arts and Culture , Faith and Service , Nation and World