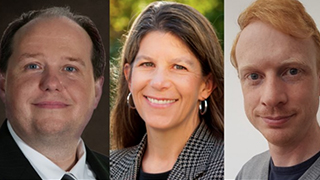 The faculty at the School of Diplomacy is made up of researchers, practitioners, and experts who provide students with valuable knowledge of international relations and model the importance of advancing the field through scholarship. A true champion of these values is Professor Martin Edwards.

Edwards was recently asked to join the editorial board for the renowned International Studies Association journal, International Studies Quarterly (ISQ), as an Associate Editor. ISQ is ranked among the top ten journals on International Relations, and as a general readership journal, it is ranked among the top three. The journal is well respected in the field, receiving over 650 submissions last year but accepting fewer than 10% of them. For the next five years, Dr. Edwards will work with a team of reviewers to select and publish the top scholarship among international relations scholars. Edwards says that "taking on this new role with ISQ feels very natural," and he believes the work will further enhance his own writing and make him a better scholar. It also advances the reputation of Seton Hall, since Edwards is the only member of the editorial board not at a doctoral university.

His colleagues at ISQ are already thrilled to have him on board. Professor Brandon C. Prins at the University of Tennessee, an editor-in-chief of ISQ, expressed that Edwards possesses the essential qualities they look for in their editorial team, not only as an accomplished scholar but also an award-winning teacher and advisor. Prins raved about Edwards, noting that "his expertise on inter-governmental organizations, political economy, and statecraft is essential for assessing the rigor and scientific quality of research being done by scholars at universities all over the world." Edwards has already begun handling new manuscripts and the rest of the editorial board is optimistic about what he will continue to bring to the journal.

In addition to publishing the works of others, Professor Edwards' own new research has drawn acclaim. He was awarded a research fellowship with the University of Southern California's Center on Public Diplomacy (CPD) for the next two years. Out of a large pool of competitive applicants with exceptional backgrounds, he was one of three that stood out. His proposed research project will look at the International Monetary Fund's (IMF's) use of digital diplomacy. His proposal, titled "Twitter Diplomacy and IMF Surveillance: Social Media, Information Dissemination, and the Challenge of Policy Leverage," caught the eye of the selection committee because of the potential value they believe this work will bring to both the academic and professional public diplomacy communities. Edwards notes that the goal of his research is to "understand the extent to which surveillance is incorporated into the IMF's digital diplomacy strategy, and whether the IMF's digital diplomacy about surveillance leads to greater information dissemination."

Edwards says that he chose this topic because, for him, the timing was right. "With the United States poised to begin a surveillance review at both the IMF and the World Bank, I believe that it is important for all Americans to understand what these organizations do and how they operate." This project will follow on the heels of Edwards' December 2018 book publication, The IMF, the WTO & the Politics of Economic Surveillance, which he presented at the IMF earlier this month.

Learn more about Dr. Edwards' scholarship, including his new book, by visiting his faculty profile.