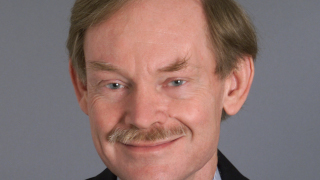 Robert Zoellick, who headed up the World Bank from 2007 - 2012, was the featured speaker at the School of Diplomacy's recent event on U.S. foreign policy.

The School of Diplomacy recently welcomed former World Bank President, Robert Zoellick, to discuss his new book, "America in the World: A History of U.S. Diplomacy and Foreign Policy." Zoellick also served as the Deputy Secretary of State, and U.S. Trade Representative from 2001 to 2005. The event was moderated by Anne Marie Murphy, Ph.D., director of the Center for Foreign Policy Studies and faculty member at the School of Diplomacy.

The event kicked off by Courtney Smith, Ph.D, the School's acting dean, who introduced the audience to both Professor Murphy and Robert Zoellick. Dr. Murphy highlighted Zoellick's extensive achievements by describing him as "one of America's most experienced and accomplished statesmen." His book, she said, successfully helps one understand the scope of American foreign policy from its foundation to its current state.

When asked what motivated him to write his book, Zoellick said that he was inspired by practical problems in understanding foreign policy. He explained that theories in diplomacy are helpful in understanding foreign policy, but not as much as practical problems and experiences. Zoellick focused on the American experience and ideas in diplomacy to further indicate the influence of the U.S. alongside that of Europe. The book gauges American experiences and includes a comprehensive analysis of U.S. history and notable political figures. Aside from this subjective analysis, Zoellick also highlights his own ideas and personal assessments of the status of U.S. foreign policy based on his experiences.

The discussion moved on to assessing the contents of the book, at which point Dr. Murphy noted some influential figures mentioned, such as Cordell Hall and Vannevar Bush. Zoellick first elaborated on Cordell Hall, to whom a whole chapter is dedicated. Zoellick uses Hall as a reference for talking about trade and foreign policy issues, such as the Smoot Hawley Act of 1930, and the Reciprocal Trade Act of 1934. Zoellick chose Hall due to his belief that trade can serve as the key to peace by helping to build prosperity and mitigate risks of conflicts with other nations. Speaking about Vannevar Bush, Zoellick described him as the "godfather of an American diplomacy that leverages perpetual science and technological change." This chapter in the book focused on the scientific aspect of diplomacy, discussing events such as Bush's 'Endless Frontier' report to the U.S. president in 1945, urging him to develop a future science policy post-WWII.

Next, Dr. Murphy assessed the five traditions of U.S. diplomacy listed in Zoellick's book. Regarding the first tradition, she asked about the significance of North America in U.S. global power and why it is overlooked in American foreign policy's agenda. Zoellick explained that North America is a base of U.S. foreign policy - a unit of three energy and trade-sufficient democracies with more than 500,000,000 people. He also agreed that it is often overlooked in American foreign policy, although it should not be, given its significance.

The second tradition deals with trade transnationalism and technology. Dr. Murphy questioned why a breakdown of foreign trade would be costly for the U.S. and how to prevent it. Zoellick responded by naming the benefits of trade, including its economic advantages, prosperity, ties with other nations, and a non-zero-sum scenario for all parties. He mentioned the U.S. acting as a cutting-edge economy, which requires it to make new rules for new industries. However, it is difficult because others want to protect the industries that already exist.

The third tradition focuses on the importance of alliances and order in the international system. Dr. Murphy raised the question of what challenges the U.S. will face as it begins to restore alliances and how these challenges can be addressed. In response, Zoellick went over a short synopsis of alliance policies throughout American history, such as isolationism in the early 20th century and the new alliance system based on economics in the postwar order. Then, he highlighted some of the challenges found in the domestic, security, and economic agendas. In terms of domestic challenges, the economy and pandemic recovery require the most effort. However, security issues stemming from the different forms of aggression the United States is currently facing, as well as other countries' reliance on the U.S., are also prevalent.

The fourth tradition deals with public and congressional support, raising the question of whether it is possible for the president and Congress to work together on U.S. foreign policy. Zoellick replied by stressing the importance of public opinion in forming a democracy. He also mentioned the theme of pragmatism with congressional support. This transitions into the fifth tradition, which discusses America's purpose: liberty and independence. The question dealt with the challenges of promoting American ideas abroad. Zoellick discussed the difficulties resulting from external environments, public attitude, and the push for democracy.

Once Zoellick discussed the five traditions, the event wrapped up with a student-directed question & answer session. The questions ranged in topics from great-power politics to the use of historical memory. Dean Smith closed the event by reminding students of why lessons in history are important and how we can connect past challenges to solve current ones.