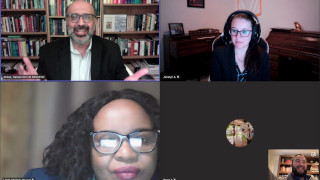 In February, student researchers participating in the National Security Fellowship had the opportunity to gain insights on Pakistan by Dr. Hassan Abbas, Distinguished Professor of International Relations in the Near East South Asia Center for Strategic Studies at the National Defense University. Dr. Abbas is a Pakistani-American Scholar who has spent time working for two Pakistani government administrations, Benazir Bhutto and Pervez Musharraf, in the late 1990s and early 2000s. This was a critical period in the U.S.-Pakistan relationship where the war on terror was materializing. During this time, the U.S.-Pakistan relationship took on new heights when then President of Pakistan, Pervez Musharraf, joined the U.S. war on terror. Since that time, the relationship has shifted dramatically, with Pakistani interests often diverging from U.S. interests and resulting in a great deal of mistrust. Throughout this process, Dr. Abbas witnessed the shift. Speaking to the students, he conveyed the shifting nature of the relationship between the two nations.

Dr. Abbas is a scholar who focuses on South Asia and the Middle East. It is almost impossible to study the field of international relations relating to Pakistan and not come across his work. His literature has made him a leading voice for security and foreign affairs in the broader region. It was perhaps his book, "Pakistan"s Drift into Extremism," that made him stand out as one of the fundamental voices on the political and military make-up of Pakistan. The collective scholarship he has produced makes him an expert in the field and has led him to appear as an analyst in media organizations like CNN and Al Jazeera. His ability to convey to the students the importance of the history and legacy of Pakistan while simultaneously pointing at converging interests between the U.S. and Pakistan will undoubtedly aid the student research fellows in their project.

The 2021-2022 National Security Fellowship has been tasked with analyzing the U.S. strategic relationship with Pakistan on behalf of the State Department. Over the course of Fall 2021 and the remainder of Spring 2022, the National Security Fellowship students are tasked in researching and compiling information relevant on their issue to then present to senior officials in the U.S. Government.

The National Security Fellowship (NSF) comprises first and second-year graduate students of the School of Diplomacy and International Relations. The National Security Fellowship is under the tutelage and leadership of Professor Mohamad Mirghahari. Mohamad Mirghahari is an alumnus, B.A.' 02/M.A. '04, and a Department of Defense advisor. In addition to his guidance to complete national level research, Professor Mirghahari extends opportunities for his students to engage and present their research and hypothesis to practitioners in the field. When attempting to understand a country as complex as Pakistan and the complex nature of its relationship with the U.S., it can be helpful for students to speak to someone with a depth of knowledge about the issue. The NSF speaker series is an apt tool for students in completing their mission critical research on behalf of the U.S. government.