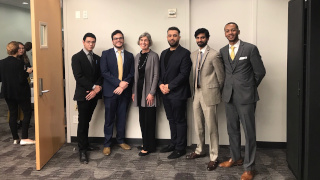 An important component of the student experience at the School of Diplomacy is participating in opportunities to put theory into practice. This spring, Diplomacy students attended a negotiation exercise at New York University (NYU), conducted by the U.S. Army War College, to role play potential peace talks between parties during the ongoing Syrian Civil War.

It is December 2020. Syrian President Bashar al-Assad stands triumphant as the smoke clears after years of fighting that failed to unseat him. Much of the Syrian population, exhausted by war and having long ago soured on the opposition as a viable alternative to Assad, welcomes the stability that a peace settlement could bring. Assad cannot, however, rebuild the country or sustain it for long without finding a way out of his international isolation.

The UN has announced a peace conference in Cairo. Foreign ministers from Russia, the United States, Turkey, Syria, and Iran have been invited. Senior representatives from the anti-Assad Syrian opposition and the Syrian Kurdish "People's Democratic Union" (PYD) have also been invited. Some delegations are not on speaking terms and the talks are hanging by a thread even before the first opening statement. But the various belligerents — each for its own reasons — believe their interests are best served by trying to negotiate a deal now rather the later.

Each team was provided with background guides and confidential administrative instructions to steer their decision-making processes in bilateral negotiations with other delegations. In reviewing these documents, negotiators had to keep in mind how they would represent the priorities and direction described, in their group interactions. Teams relied on a Head of Delegation (HOD) and a Team Communicator to serve as the delegation's point of contact for negotiation requests, and to highlight what issues they would not compromise on, under any circumstances. 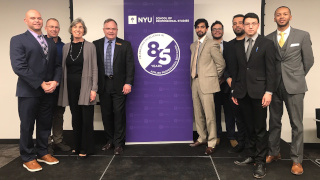 The exercise was co-facilitated by School of Diplomacy faculty member Ambassador Maureen Quinn. Ambassador Quinn served the U.S. State Department for 25 years in roles such as Coordinator for Afghanistan, Acting Chief of Mission in Kabul, and the U.S. Ambassador to Qatar, Morocco, Pakistan, Guinea, and Panama. She has worked as Deputy Executive Secretary in the Executive Secretariat; Executive Assistant to the Under-Secretary for Economic Affairs; and held a mid-career Pearson Fellowship in the U.S. House of Representatives in Washington, D.C.

Ambassador Quinn noted that what made the exercise unique was that it had the same qualities as the negotiation exercises that the college produces for its mid-career professionals. She was also proud to say that the Seton Hall students were very active, and "demonstrated a seriousness of purpose and respect for each other."

Ahmad Choudhary, a graduate student in his first semester, was drawn to participate in the negotiation exercise because of his interest in geopolitics, and experience with model UN during his time as an undergraduate student at Georgia State. He was chosen to serve as the head delegate for Turkey, a role that he found to be a great way to practice the diplomacy he's learned throughout his first few months at Seton Hall. "I enjoyed the ability to engage with many students in the area that are in similar international relations programs," he shared, "and meeting professors and practitioners from this field of study was a great networking experience."

John Cordoza, the Assistant Director of Financial Aid for Incoming Undergraduate Students and a first-year graduate student, chose to participate for a number of reasons. He felt that the opportunity to participate in an exercise that was similar to those designed for senior military and civilian personnel set it apart, and the scheduling made it so convenient he simply couldn't pass it up.

"I was able to experience some of the difficulty inherent in attempting to form consensus between multiple parties, particularly those that may be operating with conflicting interests and purposes," Cordoza recalls. "The exercise helped me to identify my strengths in negotiation, mediation, and discourse which has since encouraged me to pursue global negotiation and conflict management as my academic specialization."

This Seton Hall delegation, comprised of faculty, undergraduate and graduate student members, represents the vast group of Great Minds in diplomacy, actively seeking and pursuing opportunities to complement their shared classroom experiences, further enhancing their skills their sense of community.