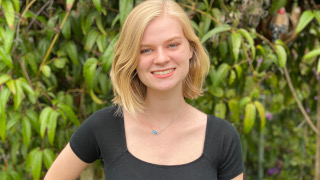 Boren Scholar Kelly Tobin will be studying Turkish and Azerbaijani at the Azerbaijan University of Languages this fall.

Since she was a youngster, Diplomacy student Kelly Tobin has been keenly interested in foreign languages. Tobin and her family lived in the Netherlands and Switzerland where she was exposed to several languages including Dutch, Spanish and German. "I began studying German in middle school and spent part of my gap year in Berlin. In college, I pursued Russian as my third language," she explains. Tobin's early passion for linguistics turned out to be key to her success as a college student. Now a rising junior, she was recently selected for a 2021 National Security Education Program (NSEP) David L. Boren Scholarship.

Boren awards provide undergraduate scholarships, graduate fellowships, and institutional grants for students to study less-commonly taught languages in countries critical to U.S. interests. As part of the program, Tobin will be adding Turkish to the list of languages she commands. An honors student, she is taking part in a Turkish language summer immersion program through the University of Wisconsin, Madison.

Initially surprised to be selected on her first attempt at seeking the competitive national award, Tobin says that the reality of being named a Boren Scholar has not quite sunk in. She may feel differently in August when she heads off to Azerbaijan University of Languages, where she'll be spending the fall semester immersed in language learning – both Turkish and Azerbaijani.

While she's taking in the rich history and culture of the country, which shares borders with Armenia, Georgia, Russia, Turkey and Iran, Tobin will be living with a host family in the capital of Baku. "I am honored to represent the University," she says. "Hopefully my experience will motivate other Seton Hall students to apply for the Boren and other prestigious scholarships."

Preparing for a Global Experience 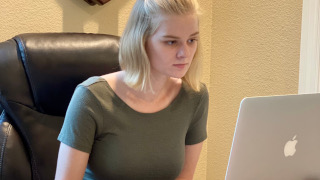 While back at home in California this summer, Tobin began her Turkish studies as part of the Boren program.

For Boren scholars, the program begins during college and extends beyond graduation. Award recipients are required to work for the U.S. government for one year after college. Tobin hopes to  become an Eastern European or Eurasia specialist, where she can apply both her language skills with her knowledge of foreign affairs. She believes that having fluency in German, Russian and Turkish, as well as an understanding of diverse cultures, will help her address issues surrounding U.S. engagement in the region.

Applying for a scholarship can be a daunting process, but Tobin leaned on her family and her network at the University for support throughout the process. Tobin's sister Emma, B.S. '19, who was a Boren Scholarship finalist, has been a role model. Now a graduate student at Oxford University, Emma encouraged her younger sister to apply for the program as a sophomore, earlier than most applicants.

A member of the University's Mock Trial team, Tobin says friends from the group were some of her biggest supporters during the process. Language instructors - Professor Martina McKeever for German, and Professor Anna Kuchta for Russian - helped boost Tobin's language skills. Their support and the techniques they instilled gave her the confidence "to shift to Turkish language learning without losing either my German or Russian language skills."

Tobin received early support and encouragement from Ursula Sanjamino, Ed.D., associate dean at the School of Diplomacy, who she says helped keep the stress to a minimum. A Resident Assistant, Tobin had to coordinate her housing plans and her job commitment with Housing and Residence Life. "HRL was willing to work around my absence to ensure that I will have housing and hopefully a job upon my return."

Finally, Tobin credits the University's Director of Prestigious Scholarships, Matthew Escobar, Ph.D., with helping her achieve her goal. Escobar, says Tobin, "has gone above and beyond to make this opportunity a reality for me. He helped me through the application process, looked at the pros and cons with me, and then put me in contact with everyone who needed to weigh in on my decision."

Impressed by her academic accomplishments, intellectual acumen, and initiative, Escobar described Kelly as a "stand-out applicant" for the Boren Scholarship. "It has been a privilege to work with both Emma and Kelly who continue to amaze me with their energy and courage."

Tobin's hard work, big dreams, and solid support network enabled her to succeed as an applicant for one of the country's top scholarships. She is ready to proudly represent the University and the U.S., not only as a Boren scholar, but as a truly global citizen.

About the Boren Award

Boren Scholars and Fellows study a wide range of critical languages, including Arabic, Chinese, Portuguese, and Swahili. Boren Awards are available to students of all proficiency levels who are committed to enhancing their skills. The Boren Awards give preference to geographic areas, languages, and fields of study deemed critical to U.S. national security (understood to encompass not only the traditional concepts of national defense, diplomacy, and intelligence matters, but also any topics addressing the challenges facing global society.)