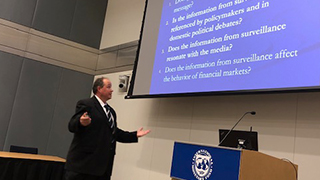 Professor Martin S. Edwards of the School of Diplomacy and International Relations has published The IMF, the WTO & the Politics of Economic Surveillance.

The book looks at the impact of economic surveillance as practiced by the World Trade Organization (WTO) and the International Monetary Fund (IMF).

Both institutions practice policy monitoring of countries. In the case of the IMF, this takes the form of annual reviews of a country's economic policies to make sure that these policies support growth and keep the global economy stable. For the WTO, these reviews are held less frequently, but also evaluate a country's trade policies to ascertain if they keep the international trading order stable.

Edwards' research seeks to develop a better understanding of how surveillance by the IMF and WTO works – and how it doesn't.

Edwards notes that both organizations have, in recent years, become "easy targets of criticism," and that "The IMF has done a great deal of soul searching about its inability to prevent the Global Economic Crisis, and the WTO is under fire for its lax treatment of China."

Governed by and accountable to 189 countries around the world, the IMF was established in 1945 to, in its own words: "ensure the stability of the international monetary system—the system of exchange rates and international payments that enables countries (and their citizens) to transact with each other. The Fund's mandate was updated in 2012 to include all macroeconomic and financial sector issues that bear on global stability."

The IMF plays a central role in the management of balance of payments difficulties and international financial crises, and surveillance is part of this mission.

Perhaps as part of its "soul searching," the IMF invited Professor Edwards to present the findings of his book to its Strategy, Policy and Review Department. The IMF is embarking on a comprehensive review of its surveillance activities in the coming year, and Professor Edwards was invited to brief members of that team regarding his findings as they pertain to the Fund's forthcoming review.

Some of the findings in the book were summarized in this Washington Post op-ed that was co-authored with a Diplomacy graduate student.

As noted therein, there is a distinct difference between publishing reports on economic conditions – even dire ones – and having those reports and their findings become part of the dialogue for policymakers.

Edwards, who was recently named a Research Fellow for the University of Southern California's Center for Public Diplomacy and an associate editor of International Studies Quarterly, points out that in 2011, the IMF's report on the United States "referred to the U.S. fiscal position as 'unsustainable' seven times." Like the famed Cassandra of Greek mythology, however, the IMF's dire description and policy recommendations were almost entirely unmentioned and certainly unheeded by policy makers in America, leading to a downgrade of the credit rating on U.S. sovereign debt two months later.

In the book, Professor Edwards examines how and in what contexts surveillance by the WTO and IMF is influential and how variations in institutional design shape its effectiveness. Edwards moves on to offer recommendations of how surveillance can be designed differently to make it more effective in the future.

Research for the book was supported through grants from the National Science Foundation, the Fulbright Foundation, which supported research in Canada through the Visiting Research Chairs program, and Seton Hall. In the book's Acknowledgements, Professor Edwards thanked 14 Seton Hall students (six undergraduates and eight graduate students) who were instrumental in the production of The IMF, the WTO & the Politics of Economic Surveillance. He writes:

I have been fortunate to have the help of an extremely talented cohort of graduate and undergraduate research assistants. To Andrew Berry, Kelsey Coolidge, Chandra DeNap, Cassie Denbow, Fred DeRitis, Yasmin Elkarrimy, Sajedeh Goudarzi, Liz Kabashi, Fadesola Ojeikere, Emily Pease McKenzie, Daria Preston, Andrew Richardson, Lori Rowen, and Stephanie Senger, each of you have my sincerest thanks for completing your tasks with flying colors….

Published by Routledge, the world's leading academic publisher in the Humanities and Social Sciences, The IMF, the WTO & the Politics of Economic Surveillance is scheduled to be available on December 20, 2018.