Diplomacy Professor Featured in Media Across the Globe on President Trump, U.N. and North Korea 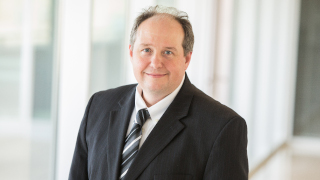 Professor Martin Edwards of the School of Diplomacy and International Relations appeared in media throughout the world regarding President Trump's speech before the United Nations, and North Korea.

Noted as a U.N. expert, Professor Edwards was interviewed by the newswire service AFP for both comment and background on President Trump's address to the U.N., and appeared in media outlets across the globe, including MSN, Yahoo News (Singapore, Australia, New Zealand), France24, The Business Times, Arabian Post, Asia One and Uganda's Daily Monitor.

You can see the article, "All eyes on Donald Trump as world leaders gather at United Nations," as it appeared in India's Economic Times.

Edwards was also interviewed by Slovak Daily Pravda on the subject, and an English version of what he said appears on the journalist's blog in "Where was the U.N. in the Trump's speech at UNGA?"

Professor Edwards also wrote a feature op-ed for China-US Focus, which is essentially an academic forum published by the China-United States Exchange Foundation, a non-government and non-profit organization based in Hong Kong.

The essay is entitled "Some Uncomfortable Truths about North Korea," and in it Edwards writes:

Following the unanimous vote to impose tougher economic sanctions on North Korea taken by the Security Council on Monday, September 11, U.S. Ambassador Nikki Haley described North Korea as alone and isolated. While this may be true, the willingness of North Korea to launch yet another missile over Japan just three days later shows that it is not without options in responding to these sanctions. Any celebration on the part of Security Council members is now very short lived, as this crisis shows little sign of abating. It is essential that we come to grips with some very uncomfortable truths about the next phase of the North Korean crisis.

Closer to home, Edwards appeared on CBS Radio affiliates nationwide including WBZ in Boston and WBBM in Chicago.

On CBS Radio, Edwards stressed the importance of gauging how other countries react to President Trump, who was speaking "with a very different tone" to that which they are accustomed.