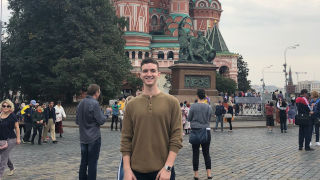 This year, Aidan Miller and Kylie Lan Tumiatti, both 2018 graduates of Seton Hall, became recipients of prestigious Fulbright Scholarships. Launched in 1946, The Fulbright Program is the flagship international educational exchange program sponsored by the U.S. government. It is designed to build relations between the people of the United States and the people of other countries that are needed to solve global challenges. 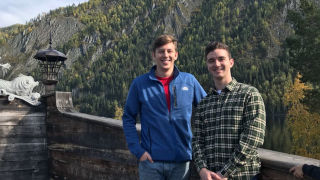 A student of international relations, modern languages and Eastern European studies, Aidan Miller will spend much of the coming year teaching English at Khakas State University in Abakan, Russia. A Russian language student while at Seton Hall, he is also involved in an English language club at the university. For Miller, living and working in Russia provides an opportunity for him to connect with his Slavic roots. "Unfortunately, my family is very far removed from the Russian culture," Miller says. "I was interested in going abroad on the Fulbright Scholarship because it provides an opportunity to learn more about Russian traditions, which I can share with my family when I return."

Miller began working on his Fulbright application the summer before his senior year. The process was extensive and included an interview in Russian, which he prepared for with help from Professor Tatiana Shiloff, who conducted mock interviews with him.

Miller says his days in Abakan are fairly typical, with weekdays dedicated to preparing for daily lectures. On the weekends, however, he uses his time to explore. So far, Miller has visited neighboring cities along the Yenisei River, the largest river that feeds into the Arctic Ocean. He also traveled to Shushenkoye, where Vladimir Lenin, founder of the Russian communist party, once lived. He was able to go inside Lenin's homes and explore the surrounding village, which has been preserved as a museum-reserve site known as Gorky Leninskiye. One of Miller's first stops was in Moscow, home of the Cathedral of the Vasily Blessed or better known as Saint Basil's Cathedral. He hopes to return to Moscow before the Fulbright program finishes.

When he returns to the U.S., Miller plans to apply the combination of his educational training, advanced language skills and teaching experience to pursue a career in public sector. 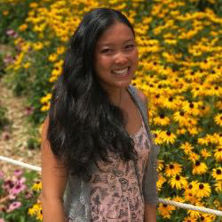 Like Aidan Miller, Kylie Lan Tumiatti also majored in international relations and modern languages. Her minor was in economics. Tumiatti received a Fulbright assignment to teach English in Malaysia for 10 months starting in January.

While at Seton Hall, Tumiatti helped start an ESL program for preschool students in her hometown of Melbourne, Florida. She is also the recipient of a study abroad fellowship sponsored by the Gilman International Scholarship program which is affiliated with the State Department.

For Tumiatti, the Fulbright Award felt like a natural next step. She says that she is excited about the prospect of teaching in this ethnically diverse Southeast Asian nation. "I'm extremely honored to be a recipient of this award," Tumiatti explains. "I feel like this is a culmination of my experiences and work throughout high school and college. I hope to apply my mentoring and teaching experience to my work next year."

When she returns from Malaysia, Tumiatti plans to finish her graduate studies in Public Affairs at Columbia University before joining the State Department as a foreign services officer through the Pickering Fellowship Program.

About the Fulbright Scholarship Program

The Fulbright Program is funded through an annual appropriation made by the U.S. Congress to the U.S. Department of State. Participating governments and host institutions, corporations, and foundations around the world also provide direct and indirect support to the Program, which operates in over 160 countries worldwide.

The program is named in honor of Senator James William Fulbright, chairman of the Senate Foreign Relations Committee. Fulbrights include both U.S. and foreign participants in exchanges in the sciences, business, academia, public service, government, the arts, among other areas. Fulbright Scholars must be fluent in a foreign language and demonstrate an interest in working and studying abroad. Since its founding, more than 250,000 recipients have been assigned to projects overseas. To apply or learn more, visit the Fulbright Program web site.

To learn about other recent Fulbright winners at Seton Hall, please read this article.