Combating Inequality in Mexico and Guatemala Through Education 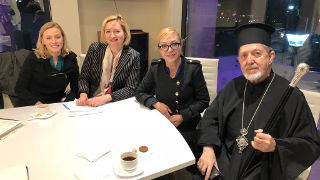 Adjunct Professor and Director of Research Projects for the School of Diplomacy and International Relations Borislava Manojlovic and second-year graduate student Morgan McMichen recently traveled to Central America to research the possibility of building trade schools in Mexico and Guatemala.

Manojlovic and McMichen traveled on behalf of One World One Community (OWOC), a non-profit organization affiliated to Seton Hall University that focuses on helping and empowering underprivileged and marginalized people around the world by giving them access to health services and education.

OWOC was co-founded by Andrea Bartoli, Dean of the School of Diplomacy and International Relations; Archbishop Athenagoras, the Ecumenical Exarch of Central America, the Islands of the Caribbean, Venezuela, and Colombia; and Chrysilios Chrysiliou, a Los Angeles-based entrepreneur and philanthropist. The organization runs a primary care clinic in an underserved rural community in Aguacate, Guatemala and is currently exploring the possibility of founding trade schools in Atizapan, Mexico and Aguacate, Guatemala. 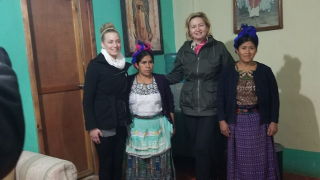 In a preliminary report of their trip, Manojlovic stated that Atizapan would be an ideal community to build a pilot trade school, especially considering the support from the local government and the current needs of the community.

The trade school would offer programs for students and adults in sewing, computer education, carpentry, welding, mechanics, plumbing and foot loom weaving. Ideally, the institution would then partner with local banks to offer small loans to their graduates to start their own small businesses.

"These communities are struggling with the access to basic human services such as health and education," Manojlovic said. "They have lost much of the good land and they have suffered greatly. They are deserving people and they need our help."

During their six-day stay, Manojlovic and McMichen met with government representatives, religious leaders, architects, and locals to get a better idea of what would be the best approach to address the needs of the community.

McMichen, who holds both a bachelor's and a master's degree in Spanish, served as translator and mediator using skills that she learned in her global negotiation and conflict management classes in the School of Diplomacy.

McMichen stated that her involvement with OWOC has been an opportunity for her to help people while working on her career development. "Many jobs look for practical experience and this is a great way for me to build that," McMichen said. "Upon graduating, I know I will have sufficient educational experience under my belt."

When asked about the importance of including students in her project, Manojlovic highlighted the value of putting concepts into practice. "Students can learn so much from getting involved in real life projects on the ground," Manojlovic said. "They can learn anything from project development, planning, needs assessment to implementation, monitoring and evaluation."

Manojlovic already started a fundraising campaign and is currently working with OWOC's board of directors to decide how to proceed with the project. If you would like to know more about OWOC or get involved with this project, visit OWOC's Facebook page or contact Professor Manojlovic at borislava.manojlovic@shu.edu.