Dean Bartoli Leads Efforts to Put an End to Genocide 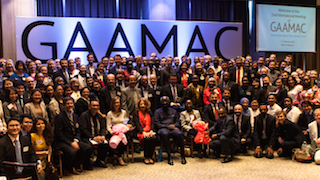 Dr. Andrea Bartoli, Dean of the School of Diplomacy, has long been committed to the prevention of genocide. Bartoli is an active member of the steering committee of Global Action against Mass Atrocity Crimes (GAAMAC), and helped connect the School of Diplomacy to the organization during its second meeting on February 2-4 in the Philippines.

Dean Bartoli enlisted a research team of four students, Abraam Dawoud, Nicholas Ciccarino, Craig Witmer, and Cynthia Sularz, to support his work with GAAMAC. One of the projects that Sularz worked on related to Bihari persecution during the Bangladesh Liberation War of 1971. "Understanding this conflict alongside the others GAAMAC focuses on has given me insight into the diverse issues of the international community," said Sularz. "The experience has been thrilling; coming in Dean Bartoli's office every few weeks to speak one on one has challenged in me ways I never thought possible." Sularz says working with GAAMAC gave her the skills she needed to get an internship with BRAC USA.

Witmer agreed, adding, "Being able to see your input have an impact in the conversation at such a high level is, truly, amazing," said Witmer. "The opportunity to participate positively contributes to our student experience by allowing us to engage actors in a way which most students, and academic institutions, can only discuss in the classroom. I'm not able to quantify how valuable having this kind of experience is."

The students' work also included a presentation at 2015 Petersheim Academic Exposition on the Framework of Analysis and the SHU-GAAMAC partnership.

GAAMAC is unique in its organization. Though primarily a state-led initiative, the organization encourages states, NGOs and representatives to dialogue openly with little hierarchy to hinder cooperation. The organization supports states engaged in preventing mass atrocity crimes and assists states that are considering developing preventive strategies.

The second meeting of GAAMAC brought participants together to explore what successful national atrocity prevention policies and architectures could look like, what the constituent parts of such mechanisms are, and how regional, national, and civil society engagement can strengthen these architectures.

Dr. Borislava Manojlovic helped lead the student research team to support the work of GAAMAC. Manojlovic and Bartoli have also worked together as editors of the special issue on Genocide prevention trends for Genocide Studies and Prevention: An International Journal (GSP), which is the official journal of The International Association of Genocide Scholars (IAGS).

Dean Bartoli was pleased that participants formed meaningful partnerships through the meeting in Manila. "Member states demonstrated a high degree of commitment to the work of GAAMAC, and took their role in the process seriously". The meeting was unique in that it fostered mutual learning and experimentation, qualities that culminated in what Bartoli described as "a new form of diplomacy."

The style of mutual learning and collaborative diplomacy championed by GAAMAC has been thriving on campus as well. Faculty are increasingly collaborating with students on research and contributing the field of international relations. Recent examples of these collaborative efforts can be seen in Dr. Martin Edwards' studies on the usage of Twitter by international organizations and public opinion of the UN; Dr. Borislava Manojlovic's Basque Country research project and study tour; and Dr. Andrea Bartoli's presentation on the Solidarity movement in Poland (which is considered to have contributed greatly to the fall of communism). Bartoli will soon be embarking on another project with heavy student involvement, this time focusing on Unarmed Special Forces.

Bartoli has long been involved with issues of conflict resolution, peacemaking, and genocide prevention. He has served as the Permanent Representative of the Community of Sant'Egidio to the United Nations and the United States since 1992, and has served in numerous peacemaking processes including in Mozambique (1990–1992), Guatemala (1995), Algeria (1995), Kosovo (1998), Burundi (1999-2000), Democratic Republic of the Congo (1996-current) and Casamance (1994- current). Bartoli has also been a participant in the U.S. State Department's testimony on Religious Persecution Abroad.

Dean Bartoli plans to continue to apply his field experience with successful new patterns of integrative diplomacy at the School level.

To learn more about the work of GAAMAC here »