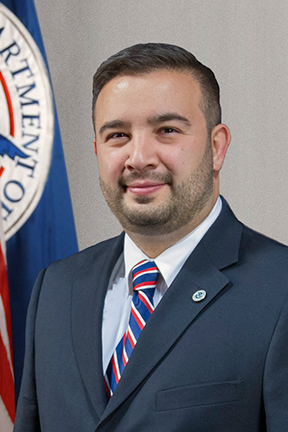 Seton Hall alumnus Mohamad Mirghahari , B.A. '02, M.A. '04, was recently named the School of Diplomacy and International Relations' inaugural Abd el Kader Fellow. Mirghahari, who holds a bachelor's in Communications and a master's degree in Corporate and Public Communications from Seton Hall, recently completed a Presidential Appointment under the Obama Administration as the Senior Advisor to the Chief of Staff for the Transportation Security Administration (TSA). He previously held leadership positions within the Department of Defense in support of national security and counterterrorism initiatives around the globe.

The fellowship is supported by the School of Diplomacy, in collaboration with the William and Mary Greve Foundation. It is named for Emir Abd el Kader (1808 - 1883), an influential and often unrecognized Muslim leader who led a war against the French occupation of Algiers in the mid-19th century. Widely admired for his deep faith, strong character and commitment to human rights, Abd El Kader's intervention on behalf of the Christian community of Damascus staved off a massacre in 1860 and brought him worldwide recognition and respect. Inspired by this legacy of faith, courage and intellect, Abd el Kader fellows at the School of Diplomacy will collaborate with organizations representing different faith traditions as well as with government agencies that are trying to address the crisis of terrorism being carried out in the name of Islam.

"Abd el Kader was seen as a man of faith who wanted to bring people together," explains Mirghahari. "He promoted intercultural dialogue and recognized the importance and vitality of all faiths. Using his example of moral leadership can only help make the world safer."

Over the next year, Mirghahari and students from the School of Diplomacy will work on research projects focused on the Middle East. Mirghahari explains that the team will be delving into real world challenges that impact U.S. foreign policy on a daily basis and collaborating with representatives from government agencies, such as the Department of State. The team expects to present research findings and policy proposals in Washington, D.C. Conferences centered on leadership, security and dialogue using examples drawn from Emir Abd el Kader are planned for the coming year as well.

"As a leader in the field of peace and conflict studies, Seton Hall provides an excellent home for this important work," according to Andrea Bartoli, dean of the School of Diplomacy. "We are excited to welcome Mohamad to this role as researcher and teacher, and to have him work closely with our students, faculty, and the many international affairs practitioners connected to the School."

Mirghahari was instrumental in bringing the Administrator of the Transportation Security Administration (TSA), Vice Admiral Peter Neffenger to campus for a major address last December. Looking ahead, Mirghahari says he wants to continue sharing his experiences working in government with the University community. "What makes Seton Hall unique is that we are able to do programs that connect students to current and former government leaders," he explains. "It gives them a chance to really understand the challenges we face as a nation and have an impact by finding solutions." Mohamad currently serves as an advisor to a number of Department of Defense organizations.