Celebrating 50 Years of the Permanent Diaconate

The Second Vatican Council (1962-1965) reestablished the diaconate as a proper and permanent rank of the hierarchy of the Church. In 1968, the bishops of the United States received approval to restore the diaconate in this country.

Cardinal Tobin has declared a one-year celebration in the Archdiocese of Newark of the 50th anniversary of the restoration of the permanent diaconate beginning October 8, 2017, and concluding on October 7, 2018. Additionally, there will be a National Diaconate Congress in New Orleans in July 2018, celebrating the renewal of the Order of Diaconate.

The first American deacon was ordained in 1969 by Bishop Fulton Sheen. Today there are nearly 19,000 serving in the United States and just over 40,000 serving the Universal Church worldwide.

Article: St. Lawrence’s Death on a Grill: Fact or Fiction? An Update on the Controversy
by Rev. Lawrence B. Porter, first published in Logos: A Journal of Catholic Thought and Culture, Fall 2017, Vol 20, n4 p89-111, St. Thomas University. 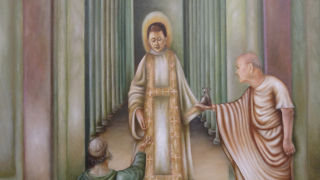 Key Leaders to Present at 50th Anniversary of Diaconate