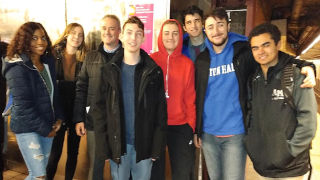 (Left to right) Nyasia Griffin, Lindsay Pansini, Jon Radwan, D.J. Mattos, Antonio D’Andrea, Yuri Glazov, Taso Rubino, and Chris De La Cruz. The picture was taken in the 34th St. subway station waiting for the downtown F train. The photo credit goes to our guide from CCRE Javairia Burton, and special thanks are due to Tim Hoffman for helping to plan logistics.

This past Monday, Prof. Jon Radwan of COAR's Institute for Communication and Religion took seven of his Journey of Transformation students into Manhattan to visit the Catholic Worker Mary House, started by Dorothy Day, who lived and died there. Mary House is on East Third Street in the East Village, just a few doors down from the Hell's Angels' headquarters. Prof. Radwan teaches Dorothy Day as one of the modern authors in his Journey of Transformation class. He explained that "one of the most inspiring things about Dorothy Day is the way she united journalism with direct action. All too often religious leaders limit communication to speech or writing, but Day shows us how our words can achieve their greatest effect when they grow from immediate personal contact with our brothers and sisters in need." 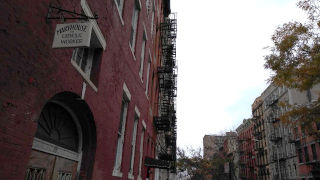 Mary House runs much the way it did when Dorothy Day lived there. Homeless people are welcomed off the street and live there with the "Catholic Workers," who share meals and clothes with them; (there is a clothing room, from which all can take what they need). Sometimes talks are given there by clerics and academics. I gave one myself there some time ago on the topic of Dante (another writer we cover in Core 1). Jane Sammon, one of the Catholic Workers and a friend of Dorothy Day, connected with Prof. Radwan and his students. Ms. Sammon had given a talk about Dorothy Day for the Core in 2018. She was happy to speak with Prof. Radwan to plan the trip and glad to have the students come to visit Mary House. Freshman Nyasia Griffin appreciated how "Ms. Sammon was able to give me a deeper knowledge on what it means to be a Catholic Worker outside of the book Loaves and Fishes written by Dorothy Day. I admire that they see others who were not Catholic workers, like Ghandi and Martin Luther King Jr., as people who followed the principles related with being one." Her classmate Taso Rubino agreed, saying "reading about these people and their deeds is one thing, but getting to see their work in person and talking to someone they talked to, leaves an impact on you that reading cannot always provide."

Last week I wrote about how Dorothy Day, along with Martin Luther King, Jr. and Thomas Merton, were three of the "four great Americans" mentioned by Pope Francis when he addressed Congress in 2015. In the Core, all three are important figures of the modern era, whose values and concerns are just as relevant today as they were in their lifetimes. King and Merton both died in 1968 (April 4 and Dec. 10, respectively), but Day lived until 1980. Though she lived to see the end of the Vietnam era and the calming of the protests common in the 1960s, she herself continued to protest injustice and nuclear armaments until almost the very end of her life. Her last arrest was in 1973, at the age of seventy-five, for protesting with Cesar Chavez and the United Farm Workers in Fresno, California. We can only imagine how committed she would be to the struggle for immigrants and detainees, such as the protest held in Newark, in which Cardinal Tobin participated, on September 4, 2019. These kinds of actions, rooted in the Church's teachings on social justice, are, in fact, part of the gift Dorothy Day has left to the church by her life and example. As one of the Core students, Darren Mattos, said, "It was amazing to see how the endeavors of a single person can blossom. Even after her death, Dorothy Day's legacy continues."