Inside the Core this Week: The Bhagavad Gita

Most Core I classes this week are reading the Bhagavad Gita, the classic Hindu text, part of the larger Mahabharata. The Gita, which means "Song," is a sacred text, but not Scripture, in the Hindu tradition. It is an epic based on Scriptures, such as the Vedas and the Upanishads, as explained in the introduction to the text for Journey of Transformation. In the spirit of Nostra Aetate, we know that all religions seek and convey truth. This text explores some of the basic questions examined in the course, such as how humans can find peace, goodness, and closeness to God in a world that is constantly offering distraction and temptation. 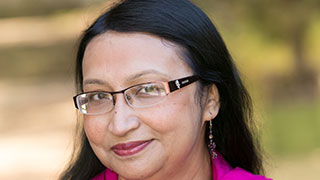 For some insight into this interesting and complex text, I have the good fortune to be able to turn to a dear friend and colleague, who teaches in both the English Department and the Core, Dr. Aruna Sanyal, Director of the Writing Center. Dr. Sanyal, a practicing Hindu, gives some insightful points about understanding the Gita. First she points out that, though the setting is a battle, the text is not primarily about war or a justification for war, per se, but, she says, "the battle of Kurukshetra is a metaphor for the many crises, worldly or otherwise, that involves our emotional, psychological, social, and egotistic selves." Some of these struggles involve overcoming the temptations of this world, of the senses and the selfish desires that plague all humans. As Hindus believe in reincarnation, the goal of freedom from the desires of this world would be oneness with God and getting out of the cycle of rebirth. Dr. Sanyal says, the teachings of the Gita "are centrally about spirituality, which in their essence, involve an understanding of how all that we desire (pleasure, 'kama'; wealth, 'Artha'; the good life 'Dharma' which translates to basic morality) does not really 'free' us from the endless cycle of birth and rebirth." What does? According to the Gita, a realization of God living within the soul, and being one with him.

Though in the Christian, Jewish and Muslim faiths, there is no belief in reincarnation, the idea of moving toward oneness with God in love and devotion as the way to escape the temptations of this world surely must resonate with many believers. Dr. Sanyal points out that the Gita recommends three "yogas" -- ways of approach -- knowledge, unselfish action and devotion. She compares the detachment advocated in the Gita with the unselfish love of a mother for a child or a doctor's unselfish dedication to finding a cure for cancer. The key idea is to live a life untainted by selfish pursuits, ruled by desire and ego.

The Gita is one of the oldest texts we cover in the Core, and often students find it complicated, but interesting. We are grateful to Dr. Sanyal for sharing her insights into this text, in the generous spirit she shows to her colleagues and students in English and the Core.