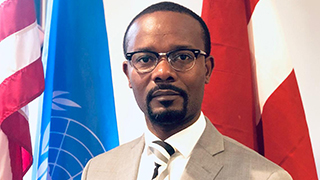 Inside the Core this week, we are focusing on a new book publication by one of our adjunct faculty members, Dr. Roger Alfani. Roger joined the Core this year, teaching both Core I and Core II. He comes to us from the School of Diplomacy, where he is completing his Master of Science degree in International Affairs, though he holds a master's degree already in biblical studies and theology and a Ph.D. in religious studies and peace-building, both degrees from the University of Montreal. Roger's book, Religious Peacebuilding in the Democratic Republic of Congo, which is coming out this month with Peter Lang Publishing, focuses on the church's role in peace-keeping in the Democratic Republic of the Congo (DRC).

It is number four in the Lang series "Religion and Society in Africa." Roger says he got interested in this topic because "I initially wanted to educate myself on an issue that continues to bother me: conflict and violence in eastern Democratic Republic of Congo (DRC). Even though I was in the DRC, I thought that I was missing pieces to comprehend what was going on there and how to offer my contribution towards peace. This quest for knowledge led me to undertake a Ph.D. in Religious Peacebuilding. While in Kinshasa and Goma (two cities in the DRC) for my fieldwork research, both leaders and grassroots’ members expressed their desire to see the fruit of my research in the forms of a book, a course, a program, a center for peace, etc."

As he delved into the topic, it became even more personal for him; as he expresses it: "First, I felt that I had a responsibility to share the stories of those whose voices are rarely heard, whose sufferings have become a sort of the norm, and meaning of life has been reduced to a mere existence…. Second, this book is a sort of a legacy for many who contributed immensely in the research during my fieldwork. I am thinking right now of two religious actors who passed away before the release of the book and who earnestly asked me to publish this work: Abbot Richard, and a layman in Goma, Jacques M. This is a kind of a tribute to those informants and victims of ongoing conflicts in the DRC which, by the way, has caused the death of more than 6 million people."

Roger focused on the role of the church because, as he says, "Religious actors and churches, in particular, are key actors in conflict settings like Goma or any conflict zones for a number of reasons. Churches do play important socio-political roles. The Catholic Church, for instance, is both a national and transnational body. By reason of their ubiquity, churches are therefore invaluable resources: they engage in preventive, mediation, humanitarian, and post conflicts' activities." In his research he focused on three types of church groups: Catholic, protestant, and revival churches. All three actively engage in peace-building activity in the DRC. His work in the School of Diplomacy fostered his research. He worked with Professor Andrea Bartoli, Dean of the School of Diplomacy, and Professors Tatsushi Arai and David Wood. In his studies here, Roger expanded his research beyond the DRC into peace initiatives in other locations, such as the Middle East, Asia, and North Africa. The School of Diplomacy also fostered an understanding of how the United Nations can work with religious actors (such as the Community of Sant' Egidio, for example) on specific peace initiatives. In fact, Roger completed a United Nations Strategic Learning Exchange Certificate on "Religion, Development, and Diplomacy." How does all of this research relate to Dr Alfani's teaching in the Core? In many ways… as he says, "The book examines the realities of people seeking to give meaning to their lives amidst contradictions and conflicts in the DRC. All the above are explored in the Core courses…. Whether Nostra Aetate, the Confessions of St-Augustine, or 'I've Been to the Mountaintop' of Martin Luther King Jr., these [Core] texts address essentially two kinds (good or bad) of relationships. On the one hand, a vertical relationship that deals with the divine. On the other hand, a horizontal relationship, which is basically the way we relate with ourselves, our neighbors and this nature." Roger links these issues overall with the mandate God gave to Adam and Eve in Genesis "to till the ground and keep it," as well as with Pope Francis' references to "our common home" (in Laudato Si, another Core optional text).

In fact, Roger's book links perfectly with Pope Francis' personal intentions for this month: "That the Church in Africa, through the commitment of its members, may be the seed of unity among her peoples and a sign of hope for this continent." We are grateful that one of our Core faculty is bringing this issue into his scholarship and teaching. Regarding teaching in the Core, Roger is very excited about his work here: "I really enjoy teaching in the Core and it is such an amazing experience. I am always eager to meet my students…Whether freshmen or sophomore, I am always impressed by the pertinence of the questions they raise, their supporting arguments, and personal experiences."