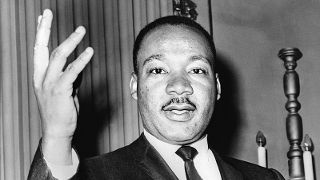 As we move toward the end of the semester (seems incredible it has gone by so quickly!), today in Journey of Transformation we will look at three writers from the twentieth century linked in various ways: Martin Luther King, Jr., Dorothy Day, and Thomas Merton. All three are among the modern readings in the course, with Dr. King's "Mountaintop" speech, given just before his death on April 4, 1968, being required, and the texts by Day (The Long Loneliness and Loaves and Fishes) and Merton ("Learning to Live") being three of many optional texts. All three writers are known for their commitment to peace, social justice, and non-violence. They are also three of the "great Americans" mentioned by Pope Francis in his address to Congress in 2015, the fourth being Abraham Lincoln. What else do they have in common? They lived out the words in the letter of James in the New Testament: "The fruit of justice is sown in peace by those who make peace" (James 3:18), and this inner peace is why their lives bore fruit that lasts.

The word "justice" here is often translated as "righteousness," but the sense is the same – good works, a holy life is the result of seeds sown "in peace by those who make peace." It is only then that our struggle for justice and our works of mercy will bear fruit with eternal value, fruit with the power to transform hearts and society. Doing the right thing is always better than doing the wrong thing, but we must do it in the right spirit – and that can be hard. In Dr. King's "Mountaintop" speech, given the day before he died, he embodies this type of righteousness:

Well, I don't know what will happen now. We've got some difficult days ahead. But it really doesn't matter with me now. Because I've been to the mountaintop. [applause] And I don't mind. Like anybody, I would like to live a long life. Longevity has its place. But I'm not concerned about that now. I just want to do God's will. And He's allowed me to go up to the mountain. And I've looked over. And I've seen the promised land. I may not get there with you. But I want you to know tonight, that we, as a people, will get to the promised land! So I'm happy, tonight. I'm not worried about anything. I'm not fearing any man. Mine eyes have seen the glory of the coming of the Lord!

Notice that these lines, quoted many times, convey the inner life of the man who spoke them: 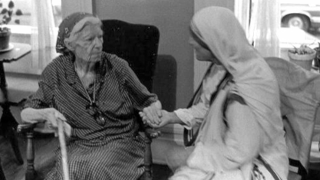 King's inner life, expressed powerfully in this final speech, inspired and empowered his works of justice and mercy. The inner life gives power to the outer life. Another person, doing the exact same actions as King but with a different, perhaps a selfish or false motivation, would not have had the enormous impact he had and continues to have. The same concept applies to Dorothy Day. In Loaves and Fishes, Day talks about the struggles she encountered starting the Catholic Worker (paper and houses of the homeless) with Peter Maurin. Between the two of them, they did enormous good in the city of New York, with Catholic Worker houses now all over. This week, students from one Core class, Prof. Jon Radwan's, visited the Catholic Worker house in Manhattan, where Dorothy Day lived and died.

In The Long Loneliness, Day talks about the personal and spiritual struggles she encountered after her conversion to Catholicism led to the break-up of her common-law marriage to her child's father. Her life consisted of a radical commitment to Christ, as she saw him in the poor she helped every day until her death in 1980.

Though one can look at Dorothy Day's life and be struck by the enormous amount of good she did for others, like King, she also received the power to do such enormous good through the grace, God's unconditional love, which she experienced and lived in her inner life. A defining characteristic of that life was humility. Day was deeply honest with herself and others about her failings, a humility that helped her to be compassionate and understanding of the faults of others. In From Union Square to Rome, a short piece she wrote to her agnostic brother, Day says:

Much as we want to know ourselves, we do not really know ourselves. Do we really want to see ourselves as God sees us, or even as our fellow human beings see us? Could we bear it, weak as we are?

And humility before God does not end there, but leads to an awareness of grace, which, in Day's case, infused all the good that she did in life. With Day it was never a choice between work and devotion; rather, the two were deeply intertwined. Referring to her sense of the incipient presence of God in her life, she wrote:

This belief in God's grace, accepting her in all of her fallen humanity, is what fueled her service and the many wonderful works she did. She would be the first to say it was the power of God working within her. 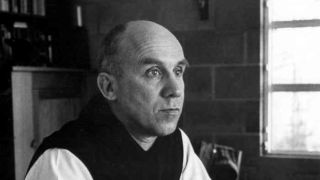 In the case of Thomas Merton, adult convert to Catholicism and Trappist monk, the inner life is so central to his experience that the temptation to think of him only in terms of his external accomplishments is less likely to occur, and the links between his inner spiritual life and his writings about world problems are very obvious. Recently, I visited Gethsemane Abbey, where Merton lived for many years. A simple white cross like that of all the other deceased brothers marks his grave. I met Brother Conrad, a lovely and gracious elderly monk, who knew Merton and studied under him. He recalled Merton's gentleness, and, in fact, his gentle responses to those around him. But this quiet acceptance did not carry on to social injustice. Despite his secluded life, Merton wrote on a wide range of topics, including his well-known autobiography, The Seven Storey Mountain, which he came to dislike as being too self-focused. (It's a wonderful book to read, however, as he is a fascinating person, who conveys the complexities of his religious experience gracefully and clearly.)

He continued as a monk to focus mostly on his spiritual life. But at one point shortly before his death, he had what might be called a mystical experience:

In Louisville, at the corner of Fourth and Walnut, in the center of the shopping district, I was suddenly overwhelmed with the realization that I loved all these people, that they were mine and I theirs, that we could not be alien to one another even though we were total strangers. It was like waking from a dream of separateness, of spurious self-isolation in a special world ...

This sense of liberation from an illusory difference was such a relief and such a joy to me that I almost laughed out loud ... I have the immense joy of being man, a member of a race in which God Himself became incarnate. As if the sorrows and stupidities of the human condition could overwhelm me, now that I realize what we all are. And if only everybody could realize this! But it cannot be explained. There is no way of telling people that they are all walking around shining like the sun.

Clearly, the experience deepened Merton's spirituality, but it also encouraged him to write about public issues (such as the war in Vietnam). Committed to dialogue as well, Merton died in an accident (he was electrocuted by touching a fan with wet hands) in Thailand at a conference on links between eastern and western forms of monasticism and contemplative prayer.

All three of these amazing people transformed the world by transforming themselves. One of the key lessons of the Journey of Transformation is that the inward journey that changes the self also, as a result, can impact the world. Their lesson to students in the Core and to all of us is this: if we want to change the world for good, we must begin by allowing God to change our own hearts. King, Day, and Merton did this, and their power for good was multiplied a thousand-fold.