Core II Students Visit Ministry for Addicts and Their Families 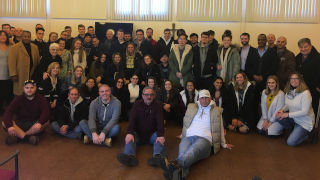 This past Saturday a group of Core II students traveled to the IThirst ministry in Stirling NJ, accompanied by their instructor, Prof. Melinda Papaccio of the English Department, and Tim Hoffman of the CCRE. Melinda's class was visiting IThirst as part of their service learning component of their Christianity and Culture in Dialogue clsas, as now there are several service learning sections of Core II being offered. Tim, who coordinates all the service learning for the Core, helped to facilitate getting the students to Ithirst, and he, along with Melinda, accompanied them through the process. It was a meaningful and deeply relevant experience for all of them, connecting powerfully with the texts in Core II.

Melinda, who has been involved with IThirst since the summer, explained the background of this special ministry, quoting from their self-description: "The ITHIRST INITIATIVE is the 21st century manifestation of the charism of Fr. Thomas Judge, founder of the Missionary Servants, which was to aid the poor and abandoned [in the earlier part of the 20th century]. In 2017, ITHIRST was adopted as an official Mission of the Missionary Servants of the Most Holy Trinity." She says that the particular objective of ITHIRST is to empower the church to be a resource for individuals, and their families, who are suffering from addiction. The acronym ITHIRST stands for The Healing Initiative – Recovery, Spirituality, Twelve Steps. Melinda explains, "Their focus is on education, community building, and support for addicts and their families. Their training program was recently offered in the Archdiocese of Boston as part of Cardinal O'Malley's Opioid Task Force in Heredia, Costa Rica, and at the Shrine of St. Joseph in Stirling, New Jersey. ITHIRST also regularly ministers to the incarcerated and those in several treatment facilities in New Jersey."

Melinda found out about the ITHIRST INITIATIVE through the Seton Hall University website, which ran a feature story about the Program Coordinator, Keaton Douglas, a Seton Hall alum with a Master of Arts in Theology from the Immaculate Conception Seminary School of Theology. Melinda explains, "Since I had a very personal interest in the problem of addiction, I attended a training seminar this summer. As we moved through the program I saw many connections to the readings we encounter in our CORE I and CORE II courses. As a result, I began to plan ways to bring those insights into my teaching." This interest led, in September 2018, to Melinda (with Keaton) arranging a group dialogue for her two Journey of Transformation classes and members of the ITHIRST team. She noted, "My students found the experience quite meaningful." 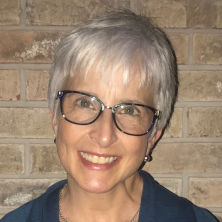 Melinda's interest in the topic of addiction is deeply personal, due to her experience with the addiction of her son. She says, "On September 22, 2018, my life was forever changed when my oldest son, Nunzio, died of an overdose. To honor his memory and his struggle I joined the ITHIRST team and attended their monthly Recovery Mass and Intercessory Prayer Session." A consummate teacher, Melinda also began to notice "the connection between ITHIRST's efforts to build community through dialogue and fellowship and [her] CORE II, Christianity and Culture in Dialogue, class." She says, "I imagined my students, engaged in dialogue with people in recovery, to help forge new bonds of community so that they might gain some understanding of what an addict suffers. I also imagined that those in recovery might find the exchange healing as well." Turning her own personal grief into an opportunity to healing for others has been very important and meaningful to Melinda. Just as dialogue is crucial to Core II (Christianity and Culture in Dialogue), Melinda explains that dialogue "is a fundamental part of the 12 step program. Addicts in recovery heal by sharing with each other through conversations. Maybe our culture can begin to heal if we all, those who are addicts and those who are not, talk to one another, sharing and building a new community inspired by Christ's command to love one another as He has loved us." For the class's service/visit this past Saturday, Melinda’s students created questions to ask those in recovery based on ideas from the first three texts of Core II. This past Saturday, February 9th, Melinda's Core II students, along with several students from other Core II classes, attended a Recovery Mass at the Shrine of St. Joseph, followed by a dialogue session with people in recovery from New Jersey and Pennsylvania. At this event there were, in all, about 60 people in all in attendance.

Tim Hoffman shared his own take on the experience: "The ITHIRST Recovery Mass and discussion provided a wonderful service-learning experience to students in the Christianity and Culture in Dialogue classes because they got to see why the readings they discuss in class are so relevant and can be applied to help address the societal challenges we face today. We had a very moving dialogue after the recovery mass which showed the power in hearing someone's story and the importance of dialogue in bringing people together. I felt that our experience provided a meaningful healing opportunity to those affected by addiction and served as a way to open hearts and minds to help to reduce the stigma associated with this disease."

The impact on the students was important to Melinda. She recalls, "There were many poignant moments of sharing and afterwards students contacted me to talk further about the experience or about their own loved ones who were struggling. I'm looking forward to their reflections on the event and the next Recovery Mass they will attend in April." The Core is very grateful to Melinda, as well as to Tim Hoffman and Keaton Douglas, for making this extremely important experience with recovering addicts a reality for students. Core II is about dialogue, people engaging with each other in mutual respect and charity. The IThirst ministry is a wonderful example of this kind of healing dialogue, which bears much fruit.