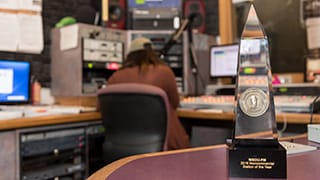 WSOU 89.5 FM, Seton Hall's legendary student-run radio station, was named a finalist for the third time for the National Association of Broadcasters (NAB) Marconi Radio Awards. Nominated in the "College Radio Station of the Year" category, WSOU is one of only five colleges stations from more than 600 across the U.S. chosen as a national leader in college broadcasting.

Considered one of the most prestigious awards in radio, the NAB's Marconi Award "honors radio stations and on-air personalities for excellence in broadcasting." Established in 1989 as the industry's signature awards program, this award is named after inventor and Nobel Prize recipient Guglielmo Marconi. Previously nominated in 2019, WSOU won the Marconi Award in 2016 for Noncommercial Station of the Year.

"We pride ourselves for the outstanding experiential learning opportunities that WSOU provides for our students," said Deirdre Yates, dean of the College of Communication and the Arts. "Now recognized three times as among the best college stations in the United States by the NAB is an extraordinary achievement. The station has been the first on-air home to thousands of our alumni who have succeeded as radio, TV, film and music industry professionals – and this latest nomination is a further testament that the tradition of broadcast excellence is alive and well at Seton Hall in the College of Communication and the Arts." 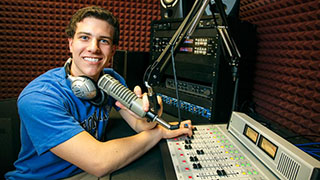 Since its launch in 1948, the station has provided a hands-on learning experience for future broadcasters and media professionals. WSOU's signal reaches all five boroughs of New York City and much of northern and central New Jersey and is also available on iHeartRadio.

WSOU is staffed by more than 125 students, both graduate and undergraduate, and airs 24/7, totaling up to 8,760 hours of programming a year for its 100,000 weekly listeners (on-air and streaming). Students conduct more than 200 band/musician interviews annually and it is the only campus radio station in the BIG East Conference to carry both men's and women's basketball games all season long. In addition, each week the station airs 13 hours of faith-based and community programming with shows designed to directly serve the information and entertainment needs of under-served audiences, including the local Armenian, Arab, Pacific-Islander and Caribbean communities.

Throughout its 73-year existence, WSOU has earned more than 70 industry awards, including six Garden State Association's Annual Memorial Journalism Awards in 2020. In 2018, the station was inducted into the Rock Radio Hall of Fame.

The station has received a Peabody Award; has been named "College Station of the Year" (multiple times) by CMJ; "Metal Station of the Year" (three consecutive times) by Friday Morning Quarterback; is the recipient of more than 30 gold and platinum records, ranging from Iron Maiden to Linkin Park; and was named a "Top 5 Rock Radio Station" in the country by Rolling Stone magazine. Between 2011-2020, it received more than a dozen Pinnacle Awards, honoring college media organizations and individual work, which include five first place finishes in the Best Radio Sportscast (2x), Best Radio Newscast (2x), and Best Radio Special Event Coverage categories.

WSOU is credited with introducing several renowned bands to the public, giving significant air-time to bands such as Pearl Jam, Korn, Linkin Park, Smashing Pumpkins, Rage Against the Machine and My Chemical Romance well before they appeared on commercial playlists.

More information about the station can be found online at www.wsou.net and www.facebook.com/WSOUFM.