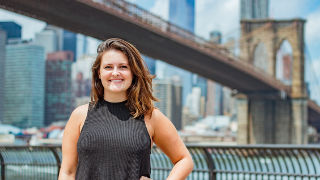 When Lauren O’Connor ’15 left the campus of Seton Hall University, she took with her much more than a bachelor’s degree in broadcasting. The foundation of her success, which has led to her being the only female and youngest producer of an Emmy-nominated show, began in the College of Communication and the Arts where she learned hands-on skills necessary to thrive in this competitive market.

Just two years after graduating, O’Connor works in New York City as an associate producer of “Good Morning Football” on the NFL Network. The show, which made its debut last year, earned a 2017 Sports Emmy nomination in the “Outstanding Studio Show (Daily)” category. O’Connor credits Seton Hall ¬– and the internships she was able to land via the university – for anchoring a young career that is already filled with many accomplishments.

“When I was interning, I always amazed my bosses with how much I knew. I will never forget my first internship at MSNBC,” O’Connor said. “I was the only one … who knew how to set up a camera, sync audio and light a small interview. Then they were more surprised when I knew the control room and could be more than an intern taking up a chair in the back row.”

For O’Connor, the desire to have a career in TV began as a child growing up in the Los Angeles area. The decision to travel nearly 2,800 miles away from her Redondo Beach home was made because Seton Hall exceeded her expectations of what she was looking for in a visual and interactive media program.

“I was deciding between several universities but none of them offered what Seton Hall had which was an in-studio program, a college campus and easy access by train to one of the biggest media capitals in the world,” O’Connor said. “(I was able) to take internships, go to school and hold a steady job during the school year and during the summer.”

By the time she left South Orange, O’Connor was well equipped to jump into the TV production world full-steam ahead. She calls on her classroom, studio and internship experience while producing critically acclaimed interviews and analysis that fans eat up every football season on the NFL Network. Gathering video, producing segments with guest interviews, and adjusting to breaking news on the fly for “Good Morning Football” can be traced back to her four years at the Hall, where she juggled internships (MSNBC and truTV), work (YES Network), Pirate TV and classes.

While working on Pirate Television as the network’s production manager and executive producer for three years, O’Connor created Hall Talk – a student run weekly show tackling the latest in Seton Hall sports news. Many of her fellow Hall Talk alums have found their own success with various companies such as ESPN, the MLB Network and YES to name a few.

As an alumna who stays in touch with her former professors and deans, O’Connor was thrilled to hear that the College of Communication and Arts is developing a unique, collaborative and interdisciplinary Sports Media program, with veteran Sports Illustrated journalist and media professional, B.J. Schecter at the helm. “The sports industry is a melting pot of people from talent, to producers, to truck engineers, to cameramen,” O’Connor said. She knows first-hand the value for students to experience and learn from the innovative curriculum in sports media, but also to be offered a wealth of hands-on experiences right on campus in writing, broadcasting, reporting and producing.

Even though she has left South Orange for the Big Apple, Seton Hall remains near and dear to her heart. “I would love nothing more than to help students with their SHU journey,” O’Connor said. As the College proudly watches O’Connor’s flourishing career, O’Connor herself is looking back with pride.

For more information on the upcoming Sports Media program in the College of Communication and the Arts, contact Associate Dean Thomas Rondinella, at (973) 275-5837, or via email at thomas.rondinella@shu.edu.

The author of this feature, Jerry Laguerre, is a Seton Hall alum from the College of Communication and the Arts. Class of 2001, Laguerre majored in Communication with a minor in Journalism.

All images included with this article were taken by Seton Hall alum Katherine Cahalin. A Visual and Sound Media major in the College of Communication and the Arts, Cahalin graduated in 2016.