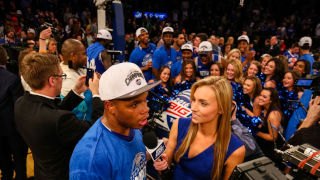 As the COVID-19 pandemic continues to progress worldwide, many are trying to better understand how the virus is affecting everyday life. Seton Hall University's Professional-in-Residence B.J. Schecter is a veteran journalist who spent the last 20 years at Sports Illustrated and most recently served as executive editor of SI and SI.com. Branden Buehler, assistant professor of visual and sound media, teaches both general media studies courses and sports media courses within the Visual and Sound Media program, including classes such as "Sports, Media, and Culture," "The Future of Sports Media," and "Sports and Film."

Schecter and Buehler are both faculty members in the College of Communication and the Arts and recently addressed the topic of sports media as it pertains to COVID-19.

How is the Sports Media industry being affected by the current state of COVID-19, such as with sports, tournaments, and now the Olympics being cancelled?

Schecter:
The novel coronavirus has affected sports like nothing in history. Usually when there is a significant world event, sports serve as a distraction and a way to unify people. We saw that with 9/11, Hurricane Katrina and many other events throughout history. In this pandemic, sports is a central part of the story, part of the problem. The virus easily spreads in large crowds and I think it will be months, if not years, before people feel comfortable attending events with 80,000-plus people.

Buehler:
To speak specifically to sports television, the last few decades have witnessed a huge rise in the number of sports television outlets — a rise that first followed along with the growth of cable television and then, more recently, the growth of internet-distributed television. To a great extent, the expansion of sports television over the last few decades has relied on live sporting events — not just to generate live event coverage itself, but also to generate content that can be discussed in the many studio shows that also fill these outlets' programming schedules. Without those live sporting events, these many sports television outlets have had to look to alternative programming to fill their schedules. A notable example has been the many outlets uncharacteristically turning to replays of older event telecasts. Of course, the loss of live event coverage has dramatic financial implications. As more and more television viewers either time shift or watch on demand, and in the process bypass advertising, live sports coverage has had great appeal for advertisers, with viewers largely reluctant to watch sporting events on delay. Both advertisers and sports television networks will be struggling to adjust to the loss of that valuable programming. More generally, sports television networks will, like the rest of the television industry, also potentially have to adapt to a broader decline in advertising as companies reevaluate their marketing budgets.

What are broadcasters and sports journalists talking and writing about?

Schecter:
There are still a lot of stories to cover and write about. The beauty of sports is it touches every part of society and is ingrained in our culture. Nearly everyone can relate to sports. In addition, famous athletes (and even some journalists) have a tremendous platform on social media. Many are now using that platform to communicate with the general public and urge them to practice safe measures and social distancing.

Buehler:
Without live sporting events to generate coverage, broadcasters have placed even greater emphasis on transactions, with the NFL's free agency period dominating the coverage on many sports television outlets. In recent decades, sports media coverage has increasingly focused on managerial activities, with more and more attention paid to player transactions and other roster maneuverings. This trend is perhaps best exemplified by the increasing interest in NFL draft coverage over the last few decades. Unsurprisingly, too, the coronavirus and its effects on the sports world have also dominated discussions.

What role have sports journalists played during this pandemic?

Schecter:
A sports journalist is still a journalist, and many have been showcasing their reporting and storytelling skills in news, business and community reporting. They have told and shared so many good stories. They have also spread the message to take the stay-at-home measures seriously (see NBA broadcaster Mike Breen's video on social media) and have shifted to covering the news of the pandemic.

How do you foresee the next few months taking shape as it relates to Sports Media?

Schecter:
Sports is going to play a central role in our recovery and getting back to normalcy. When live sporting events return, people will feel safer and better about things. Many events will begin without fans in attendance, but slowly we'll get back to normal. I truly believe that once people feel safe going to a baseball or basketball game, they will feel safe resuming their normal lives.

Buehler:
Without any certainty regarding the return of live sports, I would expect transactional coverage to continue to play a large role. For example, I would assume that as many outlets as possible will supersize their NFL draft coverage. I also expect that the effects of the coronavirus will continue to dominate coverage, with many discussions centering around either what it might mean to resume suspended seasons or to transition into new ones. Moreover, television networks will likely also keep experimenting with other types of programming that might be able to fill their programming schedules, such as esports coverage. Meanwhile, television networks and advertisers will continue to have to figure out how to adjust to inevitably lower ratings and the loss of event coverage that could be counted on to gather large, live audiences.

Do you have any tips to share with students/community on how to stay tuned with the sports industry during this time?

Schecter:
Support media outlets and read, watch and consume everything you can. There is tremendous journalism and storytelling out there. Learn from it and try and add to it. Students have the opportunity to add to the conversation. For instance, Pirate Sports Network seniors Joe Binder and Keith Egan did an incredible job with the series that chronicled the men's basketball team's journey through this special season. If you haven't seen their "One Shining Moment" video yet, you can watch it and the other chapters here.

Buehler:
In the Future of Sports Media class that I'm offering this semester — now online — I've been asking my students to pay careful attention to sports television programming schedules. These schedules make it abundantly clear how much sports television networks have had to adjust over the last few weeks. These altered schedules then also make it apparent just how much these outlets typically rely on live event coverage. 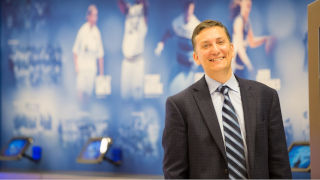 In 2017, Professional-in-Residence B.J. Schecter was appointed to develop a collaborative and uniquely interdisciplinary Sports Media program at Seton Hall University and, to that end, is working with the College of Communication and the Arts, the Stillman School of Business' Center for Sport Management as well as the Seton Hall Sports Poll. Additionally, Schecter serves as the faculty adviser to the University's award-winning student newspaper, The Setonian.

Currently the editorial director for Baseball America, Schecter has an illustrious background with 25 years of sports media experience. Students in Schecter's classes directly benefit from his industry experience in editing, writing and producing sports-related content for major media outlets. He has taught journalism courses at high-profile universities throughout the New York metropolitan area, the sports media capital of the world, including Columbia University, CUNY Graduate School of Journalism, Fordham University and the University of New Hampshire School of Law.

An accomplished multimedia editor, Schecter worked in a variety of roles at Sports Illustrated. Over the years, he has supervised investigative teams, reported on college sports, managed website content and edited special projects such as "Crime in College Football" and "50 Most Influential Minorities in Sports." Prior to Sports Illustrated, Schecter spent five years as a reporter with The Boston Globe. 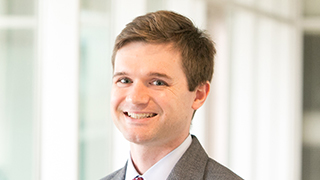 Branden Buehler is a media studies scholar whose research centers around sports media, with a particular focus on sports television and sports media industries. He received his Ph.D. in Critical Studies from the University of Southern California School of Cinematic Arts and has published work in The Velvet Light Trap, the Journal of Sport History, and the collection Mapping Queer Space(s) of Praxis and Pedagogy. Buehler is currently working on a book manuscript exploring the rise of managerial sports media oriented around transactions and player evaluations.