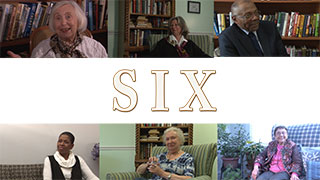 More than 125 community members gathered for the premiere of Six, a documentary film created and edited by College of Communication and the Arts student filmmakers featuring the life journeys of six South Orange senior citizens, that premiered at the South Orange Performing Arts Center on May 1.

The documentary was a collaboration with local nonprofit South Orange Seniors and was created as part of the Television Field Production I and II courses taught by William Pace, associate professor of digital media, with the support of Thomas Rondinella, professor of communication.

“There is always a component to the course where one of the projects that the students work on is a nonprofit video,” said Pace. “The South Orange Seniors knew they wanted to do a video and had come to speak to Professor Rondinella about seeing if the College of Communication and the Arts could help make it happen. I then met with them to discuss the opportunity and their vision.”

The South Orange Seniors were founded in 2014 by Tonia Moore, Nan Samons and Peggy Cinberg. They noticed an opportunity to better engage senior citizens in the community. Today, they are an official nonprofit and conduct regular focus groups in order to understand the needs of seniors.

One theme that emerged from focus groups was the idea of storytelling. “The senior citizens of South Orange have inspiring, important stories to tell,” said Cinberg. “We wanted to partner with Seton Hall to develop intergenerational connections and share inspirational perspectives from significant times in history. The students and viewers were able to appreciate that the people they see walking through town are real people and have real stories, and were able to gain perspective of a time in history this is quite far from their own experience.”

The students spent the fall 2015 and spring 2016 semesters in six groups interviewing several senior citizens from South Orange, editing the footage that had been shot and adding in accompanying material.

Veronica Valencia of Corona, California, a senior broadcast and visual media major with a concentration in television, worked on the project for both semesters. “I had the chance to work on both the interview and post-production process,” she said. “The main goal was to create a theme among all interviewees that we could easily convey. After doing this project, I realized that South Orange is a thriving, growing community and has so many people who care and are involved in its success.”

“I hope the students saw the impact their work had at the screening,” said Pace. “They had the opportunity to go in-depth and illuminate the stories of the interviewees. I think the students realized that they were dealing with people with real lives and real stories and were able to connect the audience to that feeling. It was really important for me to show them that their work is not just theoretical but goes out in the world and has a lasting impact.”

Cinberg echoed Pace’s thoughts. “I think it was very good for the students to see the impact of their work. They did an amazing job at humanizing the interviewees and got to see that their work had a real effect on viewers,” she said. “There is no doubt that this documentary made a profound impact in the community.”

“The South Orange Seniors are consistently impressed with Seton Hall’s support of the local community and their commitment to building intergenerational relationships,” said Cinberg. “Our relationship with the University extends beyond this project. We work with the Division of Volunteer Efforts and students for snow shoveling for senior citizen apartments and partner with them for an annual Senior Gala. I have also personally taken classes at Seton Hall for audits as part of the University’s senior citizen registration program.”

“I am so thankful to have had the opportunity to shed light on the South Orange community,” said Valencia. “As a graduating senior, I encourage students to take pride in what they do. If you take pride in your work and put forth a great effort, you can come out with a really impactful end result.”

For more information about the College of Communication and the Arts, please visit the website here.