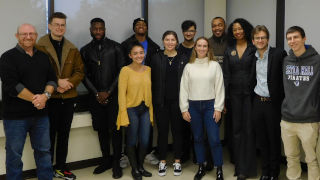 When documentary filmmaker and College of Communication and the Arts instructor Wayne Vollweiler first sat down with Reverend Terry Richardson, he wasn't entirely sure what to expect. After spending the better part of the summer searching for just the right subject for his Field Production students to develop into a short documentary, Vollweiler heard through a colleague about the charitable work Reverend Richardson was doing for the local community. The two met over coffee one morning, and what was meant to be a quick conversation blossomed into a two-and-a-half-hour discussion about the illustrious history of First Baptist Church and the many inspiring stories the church community had to offer. Quickly realizing the over one-hundred-year history of First Baptist would be way too much to condense into a ten-minute film, Vollweiler instead decided their goal should be to bring awareness to the charitable work being done by Reverend Richardson and his congregants.

For students in the Visual and Sound Media program, Intro to Field Production is an essential part of their academic development, introducing key concepts in documentary filmmaking and news production. Vollweiler elaborates, "This class is meant to give students crucial hands on experience all young filmmakers require." At the start of the fall semester, Professor Vollweiler proposed the idea of developing a film that would take a full semester to produce. "I began the year by explaining to the class that this project will land squarely on their shoulders. My role would be both teacher and executive producer. While I would oversee everything and guide them through the learning process, everything else regarding the direction of the project was up to them."

The student team was given eleven short weeks to research, write, shoot, and edit the film about Reverend Richardson, an undertaking few considered to be easy. With a class comprised of thirteen students of varying technical knowledge and professional aspirations, the biggest challenge according to student director Mekeila Erspamer was simply aligning everyone's schedule. "Trying to juggle the schedules of busy student athletes and WSOU workers can be difficult as it is, but then trying to coordinate with our interview subjects and making sure we had the right equipment added quite a bit of pressure."

The turning point for Erspamer was attending one of Reverend Richardson's services at First Baptist, an experience she and other students won't soon forget. "From the moment it started I felt like I was a member of the community. Reverend Richardson has a great way of preaching directly to you and is adamant about making sure his congregants follow his teachings so they might pay it forward and impact the world." 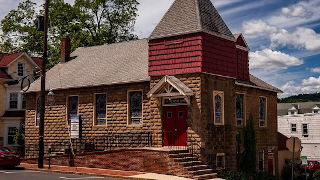 The group worked tirelessly over the ensuing eleven weeks, interviewing members of First Baptist and local community organizers. They also gathered B-roll from all over local South Orange to give the film the authenticity it required. Erspamer revealed, "We were only able to interview Reverend Richardson once, but the way he so graciously worked with us and treated us like professionals gave us all the extra confidence boost we needed." Despite the truncated production timeline, the group was able to deliver the final cut of the movie ahead of schedule. Vollweiler boasted, "Considering this was all done on a zero-dollar budget, the fact that they sailed through the finish line in only eleven weeks is pretty astounding."

In celebration of the film's completion, Vollweiler hosted an exclusive screening on campus for students, members of the First Baptist community, including Reverend Richardson, as well as College of Communication and the Arts' Dean Deirdre Yates and other members of the CommArts community. After the screening, students shared in an open forum what working on the project meant for them and expressed an abundance of gratitude for being able to work on a project about someone as inspiring as Reverend Richardson.

Jack Otto, a student in the class and a writer and editor on the project shared during the forum, "I have never felt so passionately about a class assignment than I have working on this project. A big part of that is the amount of freedom we're given by Professor Vollweiler. At the beginning of this semester most of us didn't know each other, and what I'm most proud about through all of this is how we came together as a team."

After thirty years in the film business, Vollweiler is confident that First Baptist Outreach is the real deal. "My students know I would never set them up for failure and I would never send them into a situation where they would have to defend subpar work. What they've produced is not only an excellent example of student filmmaking but is objectively of professional quality which just makes me so proud."

For more information on the College of Communication and the Arts' Visual and Sound Media program, contact Amanda Carcione at amanda.carcione@shu.edu.