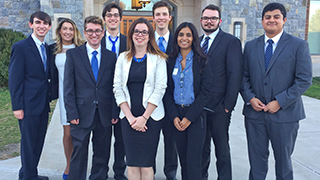 When people think about ethics they think about taking a philosophy class and learning about the roots of an ancient civilization. The students of Seton Hall's Ethics Bowl team take the questions of real contemporary issues such as the ethical issues of: whether or not our trash is private, climate change refugees, and Native American rights in our modern world and bring them to debate competitions.

The students' struggle with the conflict between their own personal ideologies and what they may ultimately learn about themselves through the events is what makes it exciting and educational.

"Practicing and performing in Ethics Bowl has made me a much more analytical and critical thinker when it comes to evaluating and debating arguments," William Moore, sophomore accounting major stated. "Being on the team is definitely worth the amount of time and effort put in because it's not only educational, but fun as well."

Co-Director of the team, Associate Professor of Communication Catherine Zizik likened Seton Hall's ethics bowl to a perfect sample of who we are as an intellectually open campus community, showing tolerance to ideologies other than our own.

"Students often think about what is right or wrong based on their own personal code of ethics, and these competitions open the conversation of ethics to the broader world of real-life companies and controversial decisions," Professor Zizik continued. "This type of practice makes students more tolerant to different ethical or unethical decisions and question what is known as the "greater good."

"Being a part of the team and training for the debates gave me a new critical perspective on key issues that I feel are too often pushed to the side or disregarded," sophomore Matthew Franco added.

Seton Hall's Ethics Bowl Team has had great showings this season as the group used its arguing prowess to secure semi-finalist and alternate-at-nationals status in regional tournaments.

The first competition of the year took place in the Southeast Regional competition at University of Central Florida. Where Seton Hall's Team "Sunshine" was undefeated in 3 rounds (6 cases) and tied in one round to earn semi-finalist status and thus, 4th place in the SE Region of the United States.

Following shortly after, the Ethics Bowl team competed in the Northeast Region and earned a spot as an alternate for the national competition in Dallas this spring.

Our Pirate-orators eclipsed many squads in their run including teams from Richmond, Wake Forest, The Citadel, UCF, USF, Georgia State, University of Alabama, and University of Baltimore.