Research Debunks Identity of ‘Rosie the Riveter’ in ‘We Can Do It!’ Poster 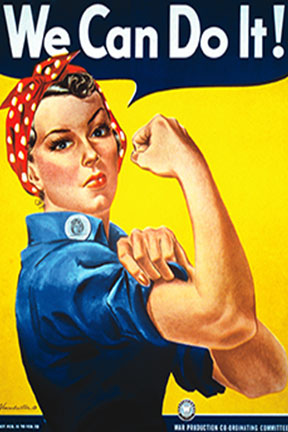 In a forthcoming article in Michigan State University's journal, Rhetoric & Public Affairs, Professor James J. Kimble debunks the commonly held and much celebrated belief that a Michigan woman, Geraldine Hoff Doyle, was the model for the iconic WWII era poster, "We Can Do It!"

Originally produced in 1943 by J. Howard Miller for the Westinghouse Corporation as part of the factory production effort during World War II, the "We Can Do It!" poster was mass reproduced in the 1980s and came to be a revered representation of female empowerment.

Through an exhaustive study over a period of years, Kimble, a professor in the College of Communication & the Arts at Seton Hall University who is presently teaching in Croatia as a Fulbright Scholar, traced the roots and history of Doyle's claim as well as its media portrayal. During his research, Kimble ultimately unearthed the original photo that is believed by many to be the basis for the poster and, importantly, was the key to Doyle's claim as the iconic poster's model.

The photograph Kimble discovered came complete with the original photographer's caption tag affixed to the back, which names Naomi Parker in Alameda, California, as the subject of the photo- not Geraldine Hoff Doyle in Michigan.

"Under the circumstances, this discovery does not, and cannot, prove with certainty that Naomi Parker was the model for the "We Can Do It!" poster; it does, however, definitively establish that Geraldine Hoff Doyle was not," said Kimble.

Doyle's widely-supported claim to be the face in the famous poster was based on this 1942 press photograph featuring a woman wearing a polka-dot bandanna who was working at an industrial lathe in a wartime factory. Doyle first came across the press photograph of the unnamed woman while reading a magazine in 1984. She immediately believed that she recognized herself in it, based on a strong resemblance and memories of her brief stint in a Michigan factory in the summer of 1942. When Smithsonian magazine later published the "We Can Do It!" poster on its cover, she again "recognized herself immediately" in the poster, which, in turn, bears a strong resemblance to the bandanna clad young woman in the press photograph. 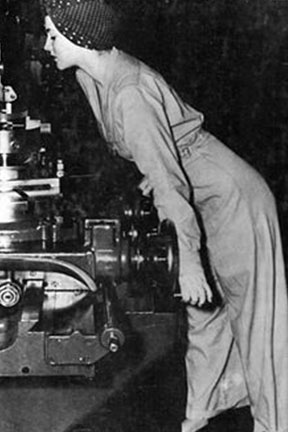 Those likenesses, that belief, and Doyle's claim were the thin but enduring reeds that supported the oft-repeated modern myth that Doyle was the model for the "We Can Do It!" poster. The story gradually gained acceptance and, with the power of the media and internet behind it, became an accepted historical fact.

But Kimble's new research demonstrates that the woman in the press photograph was actually named Naomi Parker, a war worker at the time at the Alameda Naval Air Station in Oakland, California. As Kimble notes, "the press photograph could indeed have inspired the poster's artist, since the timing is right, but if it did then the claim to being the woman in the poster would rightfully belong to this previously unknown woman in California, not Geraldine Doyle in Michigan."

Doyle's story, first reported by Michigan History Magazine in 1994, was echoed in the ensuing decades by countless newspapers, magazines, history books, and bloggers---and even by the Michigan Senate, which formally honored Doyle in 2002. Professor Kimble notes that the initial account in Michigan History Magazine somehow concluded that "most likely her picture was used as a model" by J. Howard Miller, the creator of the "We Can Do It!" poster. Kimble also notes in his article that when queried for the Michigan History Magazine article, a Smithsonian official suggested that "if her photo had appeared recently, then Miller 'might have drawn from it' to create the poster."

Kimble remarked, "I'm not sure how Michigan History Magazine concluded that 'most likely' Doyle's picture was used by Miller to create the 'We Can Do It!' poster, but in time, even that unfounded conclusion's doubt was swept away, and the greater doubt implied by the Smithsonian's use of 'if' and 'might' soon turned into a steady chorus of 'is' and 'was' in other writers' hands."

Kimble further noted, "When Doyle passed away in 2010, the media echoes hit a crescendo, with wave after wave of narrative liberty lamenting in no uncertain terms 'the passing of "Rosie the Riveter," the model for the "We Can Do It!" poster.' Her death was covered by media outlets, big and small, throughout the world with very little journalistic restraint. In the age of the internet, stories multiply and feed upon themselves, citing each other as sources, all distressingly void of independent research. And this story, because we now know it isn't true, can, and does, forensically tell us a lot about modern media." 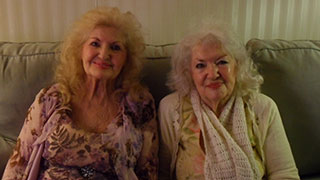 From left to right: Wyn Loy and Naomi Parker Fraley.

As part of his research, Kimble flew to California to meet Parker (now Naomi Fern Fraley), the woman now proven to be pictured in the press photograph wearing the iconic polka dotted head scarf and operating the industrial lathe in a factory in Alameda, California.

Parker is now 94 years old but remembered the photography shoot at the naval base in Alameda, across the bay from San Francisco, which was followed a week later by her appearance in a 4 minute newsreel filmed by the Hearst Corporation. Parker, then 20 years old, and her sister, Ada, were among the first women to be employed as full-time mechanics at the naval base (they were ultimately joined by more than 400 women in the machine shop, and another 3000 elsewhere on the facility). They worked at a wide variety of tasks, from patching wings to drilling to bucking to riveting, depending on the Navy's repair schedule for its damaged planes.

Parker also recalled finding out about Geraldine Doyle's claim to be the woman in the well-known photograph. In 2011 the Rosie the Riveter National Park put out a call for Rosies to share their memories and artifacts from the war years. Parker and her sister sent in some items, including a clipping of the lathe woman photograph from a 1942 newspaper, noting that Parker herself was the subject of the photo. The Park Service soon replied in a formal letter, saying that its personnel were already familiar with the picture of that woman, whom other sources had previously "identified as 'Geraldine Doyle.'" By that point, Doyle's tale was so widespread that even government officials had trouble disbelieving it.

Professor Kimble concludes, "Throughout the course of my study, I found no evidence whatsoever of ill will or duplicity on the part of Geraldine Hoff Doyle. The picture of the woman at the lathe, wearing a polka-dot bandanna, really did look like her, but incontrovertible proof now shows that the photo was taken in Alameda, California, not in Michigan and that the subject was Naomi Parker, not Doyle. It was an honest mistake, but one that needs to be rectified. Naomi Parker's historical identity was inadvertently co-opted in what should be a cautionary tale-for media everywhere."